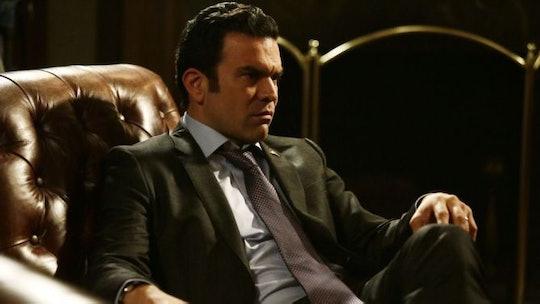 In true Scandal fashion, the Season 6 premiere began with an assassination attempt on the president-elect that turned out to be fatal after all. But what fans everywhere are wondering now is: who shot Frankie Vargas on Scandal? As the would-be president, he had a lot of power to gain, and by shooting him, that power would be free for someone else. The man they caught was someone unrecognizable, but he also isn't part of any bigger regime, so he could have been a hired hand.

The person who stands to gain the most by Frankie dying is Cyrus, who took over his campaign and eventually became his vice presidential running mate. No one has ever accused Cyrus of being ethical, so to think that Cyrus had Frankie killed on Scandal wouldn't even be surprising.

According to David Rosen, at this point, literally anyone could be president. Since there is very little precedent for a situation like this, David told Fitz that "The next presidency is wide open and "the next president is who you say it is." Which could very well be Cyrus, since he knows what he's doing, even if Mellie as the next president makes the most sense. Though as it stands, Mellie is already shying away from the possibility of the title, given how dangerous it obviously is.

Fitz's decision will set the course for the next several seasons of Scandal, but before it can even be entertained that Cyrus had Frankie killed, the identity of the gunman needs to be further investigated. Cyrus, once a very prominent and in your face presence on Scandal, has been noticeably absent in the season premiere and when Olivia checked the recording of Frankie's assassination, she said that he did seem to step out of the way. There's little doubt that Cyrus knew about or even planned it, but it's hard to say if he planned to have Frankie actually killed.

The other suspect who may have had something to do with Frankie's death is Papa Pope himself, who was quick to urge Olivia to try and take the presidency. In a perfect world, this would lead to Olivia becoming president somehow, but it's probably not going to be that easy for her. The other thing he would have to gain would be possibly getting Jake into office via Mellie, so he may be even more motivated than Cyrus in a way. But in the end, it was Cyrus who was fingered for the death of Frankie, even if he hasn't yet admitted it.

The gladiators hit a break when they hacked into the FBI voicemails. A woman who worked on Frankie's campaign left a message saying that it was Cyrus who has Frankie killed and shortly after, her house literally blew up with her inside. Though Cyrus hasn't been able to confirm or deny it yet, Olivia is on a warpath now, so basically he's screwed.