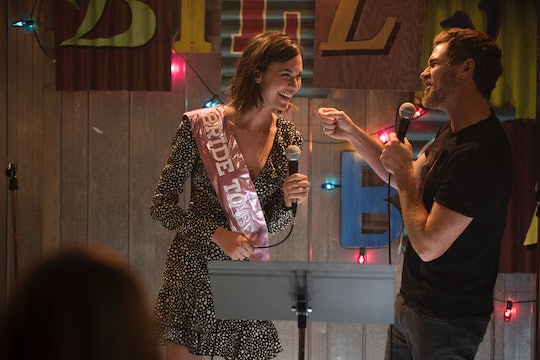 Freeform's 'No Sleep 'Til Christmas' Features This Famous Celebrity Couple

One of the best things about the holidays is the heartwarming movies you get to watch all season. But Freeform’s latest release, No Sleep ‘Til Christmas, might just be the holiday rom-com you have been waiting for. The movie — which airs as part of the network’s 25 Days of Christmas programming — features a few familiar faces, so viewers are wondering: who stars in No Sleep ‘Til Christmas?

The cast of No Sleep ‘Til Christmas actually features a pretty sweet pairing. Real-life married couple, Dave Annable and his wife, Odette Annable are playing the lead roles of Lizzie and Billy. You may know Dave from his recurring role as Justin Walker on the ABC series Brothers & Sisters. House fans may remember Odette as Dr. Jessica Adams, but her most recent role is that of Samantha Arias aka Reign on CBS’s Supergirl. The Originals and Younger star, Charles Michael Davis joins the cast in a supporting role as Lizzie’s fiance, Josh.

No Sleep ‘Til Christmas tells the story of Lizzie, a high-end event planner who is anxiously preparing for her own upcoming wedding. The problem is that Lizzie is an insomniac, and she lies awake every night next to her fiance Josh, trying her best to get some sleep before her wedding day. “I haven’t slept for more than two hours in the last month, and I’ve tried everything” Lizzie says in the trailer for the movie. “If I don’t get any sleep, it’s going to ruin everything.”

One night, Lizzie goes out for a drive and literally runs into Billy, another insomniac who was out jogging because he couldn’t sleep either. The two head to the ER, but in Lizzie’s car, they fall asleep next to each other. Upon waking up, the pair realize that they can only fall asleep when they're next to each other, so Lizzie offers to pay Billy to sleep next to her every night until her wedding. Of course the whole situation is platonic, and Josh knows nothing about it, but over time, Lizzie and Billy seem to find more of a connection than they ever expected.

In a clip from Entertainment Tonight, you can see why No Sleep ‘Til Christmas may the funniest holiday rom-com ever. In a scene where Lizzie hunts down Billy at his place of work, she hilariously asks him if he would sleep with her. "So, Billy, I guess what I'm trying to ask is, oh God...Will you please try to sleep with me again?" A stunned Billy asks Lizzie if she’s an undercover cop, and she has to adamantly deny that she’s trying to bust him for prostitution.

After some convincing, Billy starts getting on board. "I'm catching up...you're asking me to sleep with you because you're getting married?" Billy asks her. "But with no sex?" Ecstatic that he finally understood her proposal, Lizzie responds with a "yes," but upon hearing that, Billy is no longer interested. “Bye,” he says to her, as she continues to convince him that this might be the cure to her insomnia. "If it actually works and I actually get some sleep, maybe then it'll be a habit and then I'll be cured," she tells Billy.

With so many laughs in just one clip, I can just imagine how much fun the movie will be. The added fun is that Odette and Dave are married in real life, so watching their chemistry on screen will be even more exciting.

No Sleep ‘Til Christmas premieres on Monday, Dec. 10 at 9 p.m. ET on Freeform.