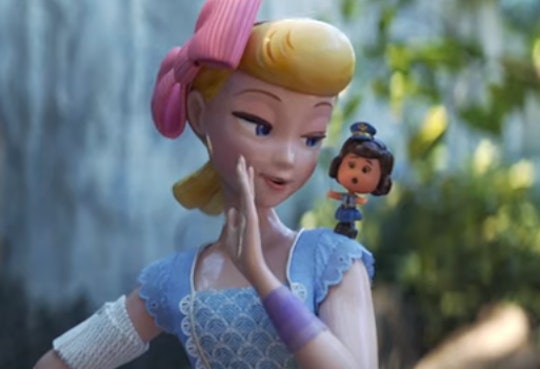 Now that Toy Story 4 is making its way to theaters on June 21, we can all let our guards down and go into full fan mode. Despite the fact that I was a grown human when the first movie came out, I've always had a genuine soft spot for the Toy Story franchise just like everyone else. It's not just the award-winning animation or the surprisingly deep story about what it's like to be a toy in a world where all kids grow up, it's the toys themselves. They're all so unique, and the latest installment has some great ones. In fact, I'm especially curious about who voices Giggle McDimples, the diminutive sidekick of a newly cool Bo Peep. She strikes me as a little wary, a little cautious, and just a lot of fun.

Now don't worry about any spoilers here, but let's just lightly go over the plot of Toy Story 4. Buzz Lightyear (Tim Allen), Woody (Tom Hanks), and the rest of Andy's old toy gang head out on a road trip with a new toy pal called Forky (Tony Hale). Along the way they get detoured and meet up with Woody's old friend-or-maybe-girlfriend Bo Peep (Annie Potts), who recently escaped a second hand shop called Second Chance Antiques with her new friend, Giggle McDimples, who is voiced by Ally Maki, according to CinemaBlend.

Fans might recognize Maki's voice in that way you do watching an animated film that can get really distracting because you can't just Google it at the theater. So here's where you know her from, in case you were wondering, she stars in Wrecked on TBS as well as in Marvel's Cloak and Dagger on Freeform. And now she's the voice of Giggle McDimples, a tiny toy with a big heart.

Maki told Fab TV that she couldn't quite believe she had been hired to play a character in a movie franchise she herself grew up with. "I feel like each movie was such a significant part of my childhood; I mean, I remember watching Toy Story over, and over, and over again. It's such a weird, full circle moment to be here," she told the outlet.

The actress is lucky enough to play Officer Giggle McDimples, the tiniest toy in the Toy Story universe. As she told Fab TV, "She's about one-inch tall and she sits on Bo's shoulder. That's kind of where her stomping ground is, and they're best friends.They're ying and yang and they found each other because they were these lost toys."

Maki has another reason to celebrate her new role as Giggle McDimples, it seems; just after the Los Angeles premiere of Toy Story 4 on Tuesday her boyfriend of six years, musician Travis Atreo, proposed to her at the Roosevelt Hotel. As she told People, "I’m still in complete shock. This was the most incredible surprise ending to the absolute best day of my life. To celebrate this moment with my best friend surrounded by my family, friends and the warmth and love of the Toy Story fam was insanely surreal."

Apparently good things do come in small packages... I'm sorry I had to.