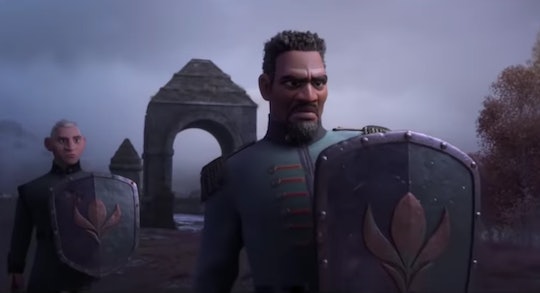 There's A Very Recognizable Voice Behind Lieutenant Mattias In 'Frozen 2'

Frozen 2 follows sisters Anna and Elsa as they go on a journey to learn more about Elsa's powers to freeze anything in sight. And as the two meet a few new people along the way, of course, Disney fans will be introduced to a very complex character and may be wondering who voices Lieutenant Mattias in Frozen 2 since he sounds so familiar.

Lieutenant Mattias is voiced by the one and only Sterling K. Brown, who's perhaps best known for playing dramatic roles, such as Randall Pearson in NBC's hit show This Is Us. So where exactly does Brown's character fall into the Frozen 2 storyline? In the sequel, Anna and Elsa go on an adventure out of Arendelle and into the Enchanted Forest, and that's where they meet Lieutenant Mattias, who's confused about how the sisters were able to get into the forest.

Mattias is described as a loyal protector of Arendelle, hence the Lieutenant title. But while protecting the kingdom, Brown's character got trapped in the Enchanted Forest for more than 30 years. But when he meets Elsa, who also happens to be the Queen of Arendelle, and learns of her powers, his long held beliefs are challenged.

It seems like Lieutenant Mattias goes on a journey of his own that is different from Anna and Elsa's in Frozen 2. Brown explained his character's role in the film to Yahoo! as "he's sort of a figure from Elsa and Anna's past because he worked for their grandfather when he was the king... and they get a chance to learn some things from their past they did not know. And they get to pull him into the present as well."

Although Frozen 2 is filled with several new catchy songs, Lieutenant Mattias does not sing any of them, even though Brown had to sing in his audition, as Metro reported.

Still, it seems like everyone's journey in the film, including Lieutenant Mattias', is a bit of a tear jerker. "Listen, if you don't [cry], the heart muscles need to be softened up a bit, because this is an emotional one," Brown told Yahoo! of the upcoming film. And Disney fans will get to witness this emotional journey for themselves when Frozen 2 hits theaters everywhere on Friday, Nov. 22.