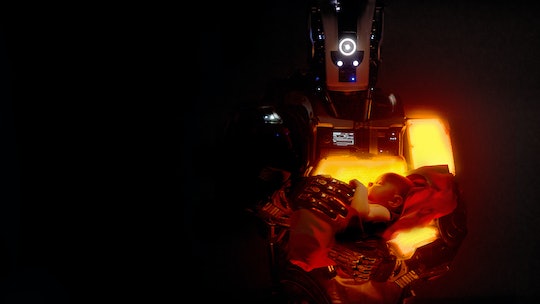 Nowadays, sci-fi thrillers and Netflix seem to go hand-in-hand. Every week, the streaming giant recommends a new flick from the genre to my queue. Starting Jun. 7, Netflix added I Am Mother, a Sundance feature that follows a robot named Mother, who is designed to raise a new generation of humans to repopulate the earth. The film stars newcomer Clara Rugaard and Boys Don't Cry actress Hilary Swank. But the Golden Globe-winner isn't the only big name in the female-driven movie. The actress who voices Mother in I Am Mother, Rose Byrne, may not be physically in the film, but her presence is unmistakable.

Although you won't see Byrne in I Am Mother, her voice may feel vaguely familiar. That's because if you're a fan of comedy or horror, you've probably seen her in action at some point. According to Byrne's IMDB profile, the Australian actress has had a long list of projects, dating back as far as 1994. However, Byrne has appeared in major box office hits like Bridesmaids, alongside Kristen Wiig and Maya Rudolph, as well as the Insidious franchise, opposite Patrick Wilson. You might also recognize her as Duchesse de Polignac in Marie Antoinette, Scarlet in 28 Weeks Later, Moira MacTaggert in X-Men, and of course, her leading role as Ellen Parsons in FX's Damages.

In I Am Mother, the filmmakers married Byrne's voice to a physical android suit worn by puppeteer Luke Hawker. During an interview with IGN, director Grant Sputore revealed that Byrne's performance was actually recorded after filming.

The incredible thing about Luke is he was the project supervisor at Weta that actually oversaw the creation of the suit. That is its own crazy story. As we began this worldwide search for who actually could fit inside this thing and be able to deliver a performance under pretty extreme circumstances — because the suit's not very light — we thought it was going to be impossible to find someone who could tick all those boxes. But in the end, we found the perfect guy at Weta Workshop, already building the suit.

Still speaking with IGN, Sputore shared how the film came together.

"In the very early conversations between Michael [Lloyd Green] and I about what this film was going to be, as the image of a hard-surfaced robot holding a baby,” Sputore said. The director then revealed that they both wanted to highlight the aesthetic differences and intellectual similarities between humans robots.

"We can be motivated by similar things," Sputore continued. "But we aren't the same thing. And we can think similarly."

But ultimately, the director wants I Am Mother to serve as "exploration of what it means to be good — and how you come to that conclusion."

"We explore different frameworks about what it means to be a good person, a good parent, a good child. A lot of us go through our lives and just sort of have natural instincts for what's right and what's wrong, but we don't really know where that comes from," the director explained. "And so the film is largely an exploration about how you get to that place, how you make the right choice, how you do the right thing. How do you teach that to a child - and how do you teach that to a machine."

From the looks of the I Am Mother trailer, where Byrne's feminine and very human-sounding voice drastically contrasts the robot suit, I'd say Sputore composed a thought-provoking feature film that will definitely have fans exploring humanity.

I Am Mother is now streaming on Netflix.