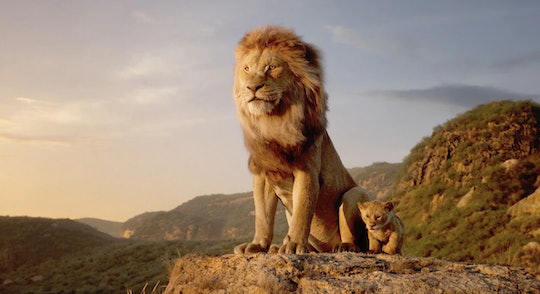 With mere days to go before we can officially see one of our favorite animated childhood films, The Lion King, back on the big screen, you may be wondering what's in store. Namely, which actors will be bringing those iconic roles and characters from Pride Rock back to life. For starters, Donald Glover takes over as Simba in the live-action remake and Beyoncé lends her voice to Nala, but who voices Mufasa in The Lion King? The casting is actually a very sentimental nod to the first film.

Though the cast of the new Lion King has been completely replaced, there is one exception. According to Entertainment Weekly, James Earl Jones, who played Mufasa in the 1994 animated version, returned yet again for the 2019 remake. Anyone familiar with the movie will recall a certain gravitas that the character had, and of his decision to bring Jones back again, director Jon Favreau told Jimmy Kimmel earlier this month that it seemed like the only way to go.

“I would have had a very tough time if I’d had to recast that [role],” Favreau told Kimmel during a recent appearance. “I see it as carrying the legacy across. Just hearing him say the lines is really moving and surreal." Favreau also mentioned that they had been working on the film for over three years.

Most of the film's stars have been out promoting the film, most recently in London, where Beyoncé chatted with Prince Harry and Meghan Markle about, of course, parenting. However, Jones has been notably absent from interviews and red carpets, leaving some to worry about his whereabouts. However, Favreau once again stepped in and reassured everyone that everything is OK.

"He was incredibly gracious to participate in this. I don't know what I would have done had he not," Favreau told USA Today this month. "He's based on the East Coast. This is something that takes a lot out of you to do," referring to the premiere and subsequent days of interviews. "So his participation was geared more toward his performance."

Though many consider him to be a master of his craft and still very much at the height of his career, in an interview with The New York Times, Jones said that he considers himself a perpetual student. "The secret is never forgetting that you’re a journeyman actor and that nothing is your final thing, nothing is your greatest thing, nothing is your worst thing," he told the publication. "I still consider myself a novice." A novice is unlikely, but his humility is admirable.

While it's clear that the film is already striking a chord with people (in a rare interview, Beyoncé called the movie's soundtrack a "love letter to Africa," noting the importance of using the best talent from Africa) in no small part due to the incredible cast who have once again brought some of the most iconic and well-known characters of the 1990s back to life.

For Jones' part, his role is incredibly special. To hear the original actor back once again playing Mufasa adds another layer of sentimentality to the film, meaning that we only have a few days until we are invariably crying our eyes out in the theater yet again.

The Lion King arrives in theaters nationwide on Friday, July 19.