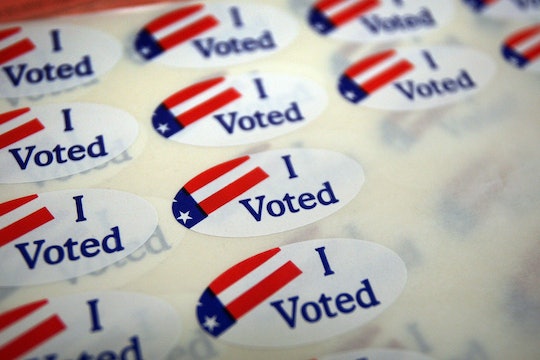 Who Votes On Super Tuesday? It Will Be A Busy Day For A Dozen States

So, long story short, Donald Trump has won three out of four states so far in the primaries for the Republican presidential candidacy, while former Secretary of State Hillary Clinton just beat Vermont Sen. Bernie Sanders in Nevada and is looking to do the same in South Carolina this Saturday. And, each candidate is looking forward toward Super Tuesday, which falls on March 1. The crowd has thinned a bit as Jeb Bush recently stepped out of the race after a disappointing finish in South Carolina. Super Tuesday happens to be the biggest single day for presidential candidates to receive delegates. But who exactly votes on Super Tuesday?

A lot's at stake, to put it mildly. A total of 12 states and one U.S. territory will make their choices for presidential candidates, and the day is considered to be a turning point of sorts during election years and normally serves to show who will be both parties' nominees. In the interest of spreading the word (Go vote!), the states who will hold primaries for both parties on March 1 are Alabama, Arkansas, Georgia, Massachusetts, Minnesota, Oklahoma, Tennessee, Texas, Vermont, and Virginia.

Alaska will hold its Republican caucus, and American Samoa will caucus for Democrats. Colorado is changing it up a bit. Colorado will caucus for both parties, though only the Democrats are actually choosing a candidate. Republicans in the state will select delegates (yes, those are people) only, and then let those delegates choose which candidate to support at the national convention.

Now, for more on why day this matters so much to candidates. Well, for one, the day's voting represents 24 percent of the Republican total delegate number needed to land the nomination, and 21 percent on the left side of the aisle. Right now, the polls show some pretty strong front-runners, but the expected winners are varied. Clinton and Trump are predicted to secure the most delegates. Interestingly, the polls don't seem to be impacting the lagging candidates' enthusiasm or the spirit of their staffs. For example, Texas Sen. Tex Cruz still contends he can win the Republican candidacy even though his prospects on Super Tuesday don't look very good. Cruz told CNN:

It will matter a great deal where the delegate count is at the end of the day Super Tuesday ... the terrain is very favorable. And we're going to campaign hard.

And, as always, Sanders' supporters and staff are optimistic and determined in the face of an uncertain outcome on March 1.