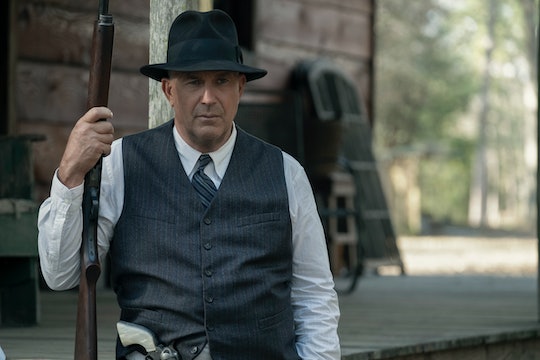 Frank Hamer From 'The Highwaymen' Is A Texas Ranger Legend

Netflix's newest buddy cop movie, The Highwaymen, follows Frank Hamer and Maney Gault, two Texas rangers who teamed up to hunt down Bonnie and Clyde. The movie is based on real life events and the real detectives who led the team that eventually cornered the famed crime duo. But Hamer was arguably the leader of the rangers who set out to find them and the movie gives you a peek at who Frank Hamer was in real life. The Highwaymen does its best to paint you a picture of the man who devoted most of his life to the law, but there's only so much you can fit in when there is a lot of other parts of the story to tell.

Hamer was born into a large family and his four brothers were also Texas rangers. Although his father was a blacksmith, it was basically his calling to do as his brothers had done, but his career in law enforcement began almost as an accident. He worked on horse ranches and in his father's shop as a kid and when he caught a horse thief on one of the ranches, Hamer got his first taste of justice. At the time, he didn't know that he would spend years as a renowned Texas ranger who took down countless outlaws.

Over the course of his career in law, Hamer worked as a Texas ranger, a Marshal, a sheriff in small lawless towns, and as a Mexico border patrol agent. Although his most notable work is easily his part in taking down Bonnie and Clyde and their band of criminal associates, he spent most of his life bringing other big crime rings to justice.

There are multiple reports of Hamer taking down members of the KKK and working to stop race-fueled fights in the small towns he worked in. In some cases, he was hired to be an enforcer of the law, while others he was hired just to keep specific lawless men out of town. I'm sensing some serious "This town ain't big enough for the two of us" vibes, but that was the era in which Hamer was alive.

One 1928 lynching that Hamer investigated involved a black man who was accused of shooting a police officer. He was kidnapped and hung from a tree and later, after his body was found, Hamer investigated the suspects rather than turn the other cheek. He found that the culprits had been friends with the detective who the black man was accused of shooting and Hamer made sure they were properly indicted.

You might know more about Hamer off the top of your head if you are from Texas, where he was born and raised and made a name for himself. But there is no denying that he made his mark before his eventual retirement from police work altogether. He spent years making it his mission to take down criminals and investigate cases until he got to the right answers, even if it meant going against the grain a bit.

A statue of Hamer now stands in Navasota, Texas, where he once served as city marshal, and he is still honored today as one of the greatest lawmen of the early 20th century. To others, Hamer is most well known for leading the team that took down Bonnie and Clyde and ending their reign of gunfire and robberies, and that alone would be enough for some Texas rangers to have made their mark on the law. But for Hamer, it went much further than that and, in a way, the Bonnie and Clyde hunt was just another case for him.