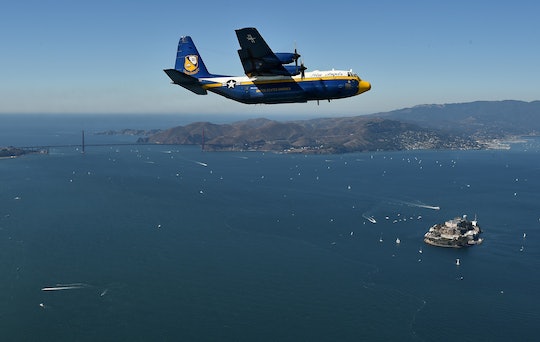 Who Was The Blue Angels Pilot That Crashed In Tennessee?

On Thursday afternoon, authorities at Smyrna Airport in Tennessee reported that a Blue Angels Navy pilot had died in a fiery crash. According to Nashville ABC affiliate WKRN, the crash was violent enought that it could be seen from a far off distance. So who is the Blue Angels pilot who crashed in Tennessee, and what do authorities know about him?

So far, the pilot's name has been withheld from the media, as police and rescue workers attempt to piece together what occurred that caused the plane to come down.

The tragic news comes shortly after a United States Air Force Thunderbird crashed during a traditional graduation flyover at the Air Force Academy in Colorado where President Obama had just given a speech. In that instance, the pilot was able to eject to safety.

The Blue Angels jet crashed during a practice for a performance scheduled at the Smyrna Airport, the Great Tennessee Airshow, scheduled for Saturday and Sunday. Both the Thunderbirds and the Blue Angels are world-renowned flight demonstration squadrons with a long history of performing at air shows. The rest of the Blue Angels jets have been grounded until further notice as a safety precaution. Witnesses reported a massive explosion and huge fireball that could be seen from miles away when the F-18 crashed. One witness, Rebecca Durand, told The Tennessean that she saw the jet go into a nosedive but assumed it was part of a stunt. "Instead, I just saw this big orange explosion."

A Navy official has since confirmed to NBC News that no parachute was deployed before the crash. The pilot is believed to have died. According to the official, the F-18 was practicing a solo maneuver.

Commander Jeannie Grenaveld, a Naval spokeswoman, confirmed that the F-18 pilot had died to Fox News. She reported that the jet had not crashed into any buildings. It is speculated that the pilot is Captain Jeff Kruss although that information remains unconfirmed by police and Blue Angels spokespersons.

Jet pilots for the Blue Angels are highly trained, skilled professionals. They are expected to log over 1,250 tactical jet hours and are aircraft commanders. According to their official website, their mission is "to showcase the pride and professionalism of the United States Navy and Marine Corps by inspiring a culture of excellence and service to country through flight demonstrations and community outreach."

While we wait to find out the confirmed identity of the fallen pilot, we can all agree that the loss of a talented, highly trained professional is worth mourning.