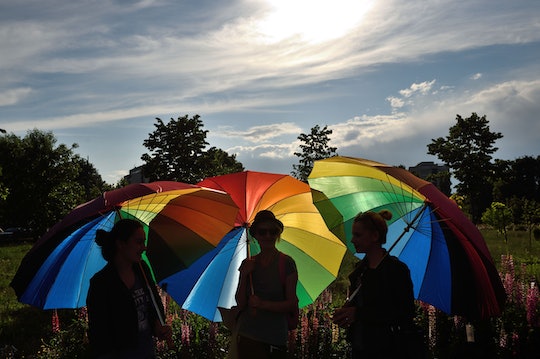 Who Was The First Gay Couple To Adopt A Child? It's Been A Long Journey

On June 26, the United States will celebrate the one-year anniversary of the Supreme Court's ruling that same-sex marriage would be legal and recognized at the federal level. This affirmation that "love is love" meant that gay and lesbian couples in all 50 states can now marry just like any other couple, although it would be another nine months before a federal judge struck down the ban on same-sex adoptions in Mississippi, the last state that barred them. Medical advances and a radically evolving public opinion have made it easier and more socially acceptable for LGBT couples to have children of their own, but the first gay couple to adopt a child in the United States did so in 1979.

Before same-sex marriage was federally recognized, caring for, gaining custody of, and adopting children often required LGBT couples to perform frustrating legal and parenting acrobatics. As recently as 2015, for example, many U.S. same-sex couples could not adopt jointly, so a child would legally belong to one partner or the other. The Washington Blade reported, though, that in 1979, two California men made it happen, a legal feat that became the inspiration for the 2012 film Any Day Now.

Although details about the real-life couple are sparse, Any Day Now chronicles the determination of a man named Rudy, along with his same-sex partner, to adopt Marco, a special-needs boy with a drug-addicted mother. "No one in this entire world wants him, except us," Paul, Rudy's partner, says in the film. "We want him. We love him. Isn't that what he deserves. Isn't that what every child deserves?"

The answer to that questions should be a resounding yes, but the journey to enabling equitable families in the United States has been anything but smooth, and each victory has been a major step in the right direction. In 1985, for example, an Alaskan court allowed a woman to adopt the biological child of her female partner, according to The Washington Blade, and it wasn't until 1997 that New Jersey made it legal for same-sex couples to adopt together, becoming the first state to do so.

Opponents of adoption equality regularly claim that children the only acceptable home is one with a married mom and dad, but that position has been repeatedly (and scientifically) rebuked. Sandy Schuster and Madeleine Isaacson showed they were capable of being both lesbians and parents to their respective biological children when, in 1978, they won the nation's first custody battle in favor of a lesbian couple. Their ex-husbands had claimed that the Washington state couple was raising the kids in an "unwholesome environment," People magazine reported.

Now, LGBT families certainly still face discrimination, but the situation is definitely improving. Last year's SCOTUS decision was a major turning point for LGBT equality, and, by extension, increased equality for nontraditional families who are just as deserving of having kids, and just as capable of infusing love and support into those children's lives. There are lots of ways to celebrate LGBT Pride Month, which is going on right now, and to commemorate the important Supreme Court decision. One of those could be to watch Any Day Now for a reminder that love is love, and family is family.