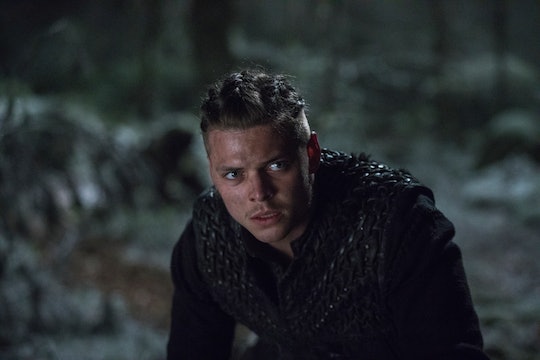 Fans of both Vikings and Game of Thrones have referred to Ivar the Boneless as a cross between Joffrey and Bran Stark, with Bran's disability and Joffrey's temperament. He’s just an all-around awful guy and since he’s based on a real life Viking, fans might be wondering, who was the real Ivar the Boneless? Vikings is all about sticking as close to history as possible, so if the TV Ivar is this bad, it makes you think the real life Viking he’s based on must have been just as nasty.

Like many of the other characters on the show, Ivar on Vikings is similar to the real life Ivar he’s based on. He was known as a cruel ruler who acted on impulse at times but was still a strong strategist when it came to war. Since it’s hard to confirm exactly what "boneless" in his name referred to, there are multiple theories from historians as to what it meant.

Some argue that it referred to impotence and nothing more, while others have claimed that "boneless" means he was born with only cartilage where bone should have been or he had a brittle bone disease. On Vikings, he’s portrayed as lacking bone density and the ability to conceive children, so the show pretty much covered all of its bases.

In real life, Ivar ruled over what is now Denmark and Sweden and eventually invaded modern day England, much like viewers have seen on Vikings. He was also part of the berserker Viking warriors known for their animalistic style of fighting. Despite needing to be carried during battle without the use of his legs, Ivar is said to have had immense upper body strength due to his use of the crossbow.

On the show, it looks like he’s about to get dethroned and defeated after finally coming into power as one of the most volatile rulers the show has seen yet. In real life, some of his siblings did die off, as shown in Vikings, but it’s not clear if Ivar’s brother Ubbe betrayed him in real life like it appears he’s about to do on the show.

On Vikings, Ubbe is gearing up to potentially overthrow Ivar by bringing together the armies of three different Danish kings. In real life, Ivar eventually left for Dublin and left behind the Great Heathen Army in England in the power of his brothers, Halfdan and Ubbe. Vikings has definitely taken a few creative liberties with the real life Ivar and everyone around him, but for the most part, it seems to be sticking close to history.

There is one area where Vikings might have to fudge the details a little bit. It's said that Ivar died around 873 from some unknown disease — not a bloody battle or death related to some big betrayal. On the show, Ivar is still relatively young, but if the 873 date is accurate, then it means he was a lot older than his Season 5 age when he died in real life. Seeing Ivar get what's coming to him is a lot more dramatic (not to mention satisfying) than watching him get a disease as an old man, so I can kind of see why the show creators would make this change.

Vikings Season 5 has just a few episodes left and it was recently announced that Season 6 will be its last. If Ivar doesn’t die before the end of Season 5, then I can see him finally meeting his end by the end of next season. Even if it differs a bit from what’s been historically recorded, Ivar’s death is long overdue.