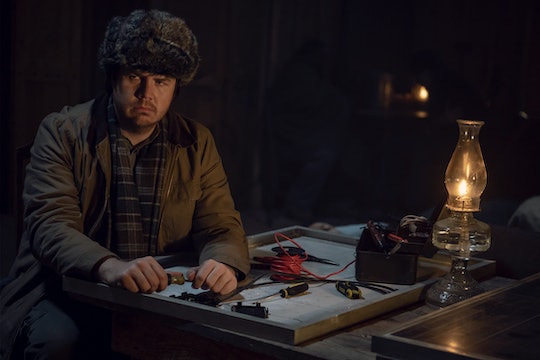 The Walking Dead Season 9 finale ended with the an epic blizzard, a snowball fight, Alpha and Beta looking scarier than ever, and a mysterious voice calling for help on the radio. Of course the call came in after Ezekiel left the room, so it might be some time before the person contacts Hilltop again. But after a somewhat calm finale, fans are wondering whose voice was on the radio on The Walking Dead and what this means for Season 10.

There are already some theories out there which pin that voice on anyone from Maggie to Rick to one of the members of the helicopter group. It’s hard to say right now who the voice belonged to, but it was calling out for help and the fact that it got through to Hilltop might not have been an accident.

The Walking Dead showrunner Angela Kang spoke to Deadline about the finale and the mysterious voice on the radio. Although she didn't give any clues about who it was, she did say that viewers can expect some answers next season. "It’s one of those things that we’re excited to tell the story of in Season 10," Kang said. "So, as with anything, that’s sort of a mysterious occurrence in the world of our people. It’s something that in some way will turn the story in a way that I hope resonates."

That doesn't give us much to hold onto until October when Season 10 premieres, but it does mean that it probably won't be a storyline that falls to the wayside for two seasons.

Kang also spoke to Insider about the radio distress call and teased that whoever is behind the voice on the radio will be part of a storyline that will "creep into the world of our heroes, and it will turn the story in some way." While some fans on Twitter are sure it was either Rick or Maggie, ready to come home and be part of the original group of survivors again, other fans think it could have something to do with Fear the Walking Dead.

On The Walking Dead spin-off, one of the strongest OG characters is Alicia, who is still part of the main group of survivors. Although the timelines of both shows aren't quite lined up just yet, one fan on Reddit believes that the voice on the radio was Alicia. This would bring both shows together and could either pull Alicia into The Walking Dead or at least show how much of a shared universe they have.

A couple of Walking Dead characters, like Dwight and Morgan, have already popped up on Fear the Walking Dead, so it’s not the wildest theory out there. And honestly, it might be a little less predictable than Maggie or Rick trying to contact Hilltop after being away for years. Plus, another fan on Reddit posted that they think the voice on the radio could be Morgan. He has popped up from time to time over the seasons and right now, he’s a main cast member on Fear the Walking Dead.

But since the events of that show still haven’t caught up to The Walking Dead, it’s possible that Morgan will go on to make a call for help, which will reach Hilltop. Regardless of who the voice on the radio is, however, it’s going to have to be someone that most fans recognize, otherwise all of this build up will have been for nothing.

Unfortunately, fans are going to have to wait until October when Season 10 premieres to get any solid answers. But chances are, once The Whisperers are (hopefully) killed off, the show will steer back to the voice on the radio.