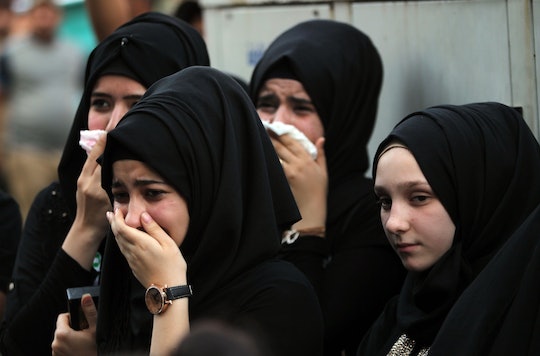 It should have been a quite morning in the busy al-Sinak market in Baghdad. Vendors were selling breakfast in their carts, with customers gathered around to grab a bite to eat. That was before two suicide bombers detonated devices among the crowd, killing 28 people. The victims of the Baghdad bombing will never see 2017, simply because they happened to be in the wrong place at the wrong time.

Gen. Saad Maan, a spokesman for Baghdad Operations Command, told reporters that two suicide bombers worked together to carry out the attack at the al-Sinak market. A car was detonated at the roadside, near an area where small car parts were sold. When onlookers gathered to see what had happened, two suicide bombers walked into the crowd and detonated their vests. The ensuing explosion killed 28 people and injured at least 53 others on Saturday morning. The jihadist group IS (Islamic State) claimed responsibility for the attack on an area known as being predominantly Shia. The victims of the attack were mostly made up of people working in the small parts shops throughout the market, which also sells seeds, clothing, spices, and food. As Ibrahim Mohammed Ali, a local shopkeeper, reported to the AFP:

They were gathered near a cart selling breakfast when the explosions went off.

The capital city of Iraq has been under a deluge of terrorist attacks in recent months, as coalition forces continue to close in on ISIS strongholds all over the country. The jihadist militant group is trying to keep control of their last stronghold in the north, the city of Mosul, against coalition attacks. In July, 200 people were killed when a truck went careening through a busy shopping center in Baghdad, the worst mass killing since 2003. In November, six people were killed in the town of Ain Al-Tamur while five other possible suicide bombers were halted by authorities before they could carry out their deadly missions.

As the people of Baghdad try to pull themselves, yet again, through the aftermath of another suicide bombing, details about the victims of the explosion have yet to be released. A photographer for the Agence France-Presse, who was at the scene of the bombing, told The Independent that torn clothes were mixed with mangled iron and pools of blood in the streets of the al-Sinak market.

It was a bloody end to a bloody year for Iraq.