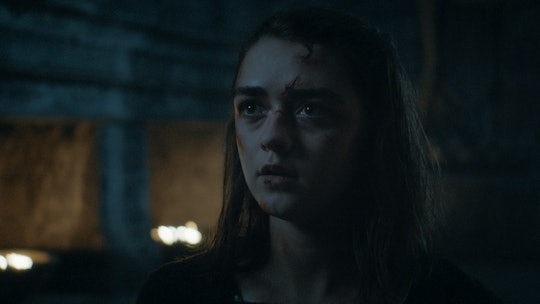 Arya's Killing Spree Is Only Just Beginning On 'Game Of Thrones'

Even though Arya has moved on from the Faceless Men and is apparently making her way back to Winterfell (finally), that doesn’t mean she’s no longer a trained killer, especially where revenge for her family is concerned. And when you think about Arya’s list that she repeatedly recites to herself as a bedtime story, there are still quite a few victims left on it to cross off. So who will Arya kill on Game of Thrones Season 7?

Obviously she can’t get them all, but there’s a very good chance that she’ll be able to at least make another dent in that list of hers. Some of the more notable deaths on Game of Thrones, like those of Joffrey and Tywin Lannister, were kills that escaped her, even if we’ve all thanked the Many-Faced God over and over for the loss of those Game of Thrones villains. Still, with just two seasons remaining and Arya back in Westeros, you have to expect that someone is going to be met with the pointy end of Needle.

The Game of Thrones Season 6 finale saw Arya kill Walder Frey directly after feeding his sons to him (I know, brutal, but that whole family had it coming), which might have been the setup for Arya’s story in Season 7 and beyond. There are still plenty of people who have it coming, so whoever Arya kills on Game of Thrones Season 7 will likely be long overdue for some Stark justice. Here are some of her most likely victims...

Considering her role in Ned’s death (and pretty much all of the other terrible things she’s done to the Starks over the years), Arya has had it in for Cersei for years. Whether or not she actually gets to kill the new queen of Westeros is up for debate though. And will Arya get to even try to kill Cersei during Season 7? Geographically, it doesn't seem like that will work out for Arya just yet, but you never know.

Long ago, before The Hound wasn’t so reformed, he killed the butcher’s boy and that act stuck with Arya. Though she got the chance to kill him, she actually left him on a hillside to bleed out and die alone. But once she finds out that he’s alive and well — which could very well happen given their respective locations right now — will Arya finally make good on the promise she made to herself?

Even though he’s technically been dead already (and brought back to life a la Frankenstein’s Monster at the hands of Qyburn), The Mountain is still on Arya’s list for his wrongdoings at Harrenhal. Again, with The Mountain in King's Landing and Arya likely spending a good part of Season 7 in the north, it may be awhile until they come face-to-face. But when/if they do, the mighty Mountain may finally fall for good.

In case you’ve forgotten, aside from convincing Stannis to burn his own daughter at the stake, Melisandre also bought Gendry to use him for his king’s blood. Of course he got away, but many believe he’s still rowing around the Narrow Sea, aimless and confused. Since we last saw the Red Woman at Castle Black, then she could still be in the north and Arya could cross paths with her as she makes her way home.

Back to poor Gendry, it was actually Beric who sold him to Melisandre. And since he’s definitely not as major of a player as, say, Cersei, Arya killing Beric during Season 7 is a definite possibility, provided that he's nowhere near home in the Stormlands.

I don’t know when we even saw him last or if it was at Ned’s beheading, but Ilyn Payne, The King's Justice, is the guy who actually executed Ned. And really, it’s a wonder Arya hasn’t had the chance to kill him before.

Thoros is the other one who took part in selling Gendry to Melisandre. And even though he didn’t exactly kill him, Gendry was still a close friend and ally to Arya. And she’s nothing if not loyal.

If it were anyone else, I’d say there’s no surefire guarantee that Arya will kill on Game of Thrones Season 7, but this is someone who’s been slowly working through the list she hasn’t given up in six seasons. Even if she’s only in the northern part of Westeros for the duration of Season 7, there are bound to be some casualties at her hand.