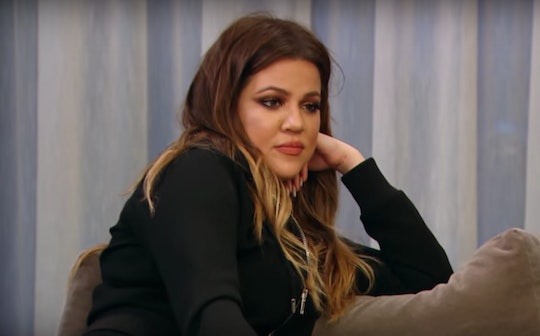 Khloé K. Has *So* Many Great Options For Her Daughter's Godmother — Here's Who She Could Choose

The Kardashian and Jenner families are famously close, which must make picking godmothers really hard as more and more of the sisters have kids. With one more baby on the way, it's hard not to wonder who will be godmother to Khloé Kardashian's daughter when she welcomes her little girl later this month. It's going to be hard to pick just one, that's for sure, and she has some godmother favors to return, too.

More Like This
Just 60 Adorable Photos Of Jinger Duggar's Daughter Felicity
The Sweet Way Meghan Markle Included Lilibet In Her Children's Book
Meghan Markle & Prince Harry Are Parents Of 2!
Angela Kinsey's Daughter Dressed As Her Character From 'The Office' & Wow, The Sass!

Just in case you're not familiar, godparents are supposed to be responsible for a child's religious upbringing and act as a sort of mentor to a child, apart from their parents. Although some people take it very seriously, godparents can't technically be named as guardians of the child in the event of some tragedy, since the Church doesn't have those powers, according to Christening Essentials. But a person could name a godparent to become a legal guardian in a will or something. It's not totally necessary that people name godparents unless they want their baby to be baptized.

Since her other sisters did so with their babies, it's likely Khloé will follow suit. The family is actually pretty religious and traditional. (Sugar Ray Leonard is the godfather to Khloé Kardashian, by the way.) According to Radar Online, Khloé is North West's godmother and Kourtney is Saint's. So it's possible that Khloé could choose Kim to return the honor or choose Kourtney, who has three children of her own. Both of her older sisters are definitely prepared to take on the role of godmother.

There are so many choices! Seriously, Khloé also has a very, very close circle of friends and since she is kind of a rebel sometimes (and just does what she wants), Malika or Khadijah Haqq or another one of her BFFs would also be a good choice. According to Kardashiandish.com, Khloé is already considering someone else entirely — her brother Rob Kardashian.

That actually makes a lot of sense if you've been watching Keeping Up With The Kardashians since forever. She and Rob are really close, and they even lived together for a while. Khloé is always the one to reach out to the brother and sort of reel him back into the family, and naming his godfather at her daughter's baptism would be another way to do that.

If Khloé chooses Rob to be her daughter's godfather, then it would be customary for the baby's father and Khloé's boyfriend, Tristan Thompson, to get to choose the godmother, so that there are representatives of both families speaking for her. Although there was never any confirmation of it, there were rumors that either Blac Chyna's friend (and Kanye West's ex) Amber Rose or Khloé were going to be Dream's godmother. If it was Khloé, then I definitely bet she could make Rob her kid's godfather.

Tristan might be all for it. According to E! News, he and Khloé have reportedly been trying to help him through his custody disagreements with Blac Chyna, Dream's mother. A source said that they all got along;

The source added, "Tristan doesn't mind having Rob around at all. He loves all of Khloe's family."

These two really do get along well. Last year, Khloé gushed about how great things were. She told Entertainment Tonight, "I’m in the best relationship I’ve ever been in and it doesn’t take a ring for me to feel that way. I believe in marriage and I want to be married again one day but I don’t have a time frame."

So she and Tristan aren't rushing to the altar, but they're pretty great at working together. Whatever Khloé chooses to do about her daughter's godparents, he'll likely be supportive. Let's hope she at leasts posts a picture of the baptism when it's time so we know who she ended up going with. The world is so ready for Khloé's daughter and everything she's going to get into.