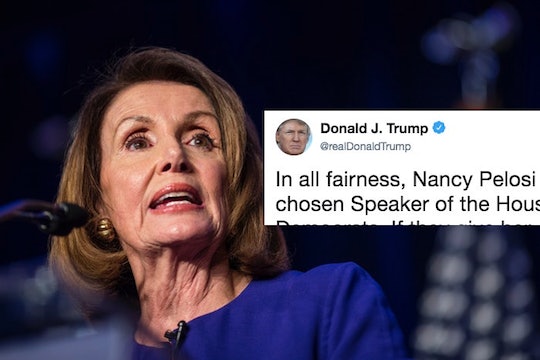 Who Will Be Speaker Of The House Now? Trump Made A Surprising Recommendation

President Donald Trump has something of a negative track record with women who openly oppose him. His former opponent for the presidential race Hillary Clinton comes to mind, as does Sen. Elizabeth Warren, and basically any other woman who might challenge him. He tends to lash out at women for not towing the line as he would prefer, which is what makes one of his most recent tweets particularly shocking. In the wake of the midterm elections, one of the most pressing questions is who will be the next Speaker of the House.

As The Hill reported on Wednesday morning, it looks like a clear winner has nearly been chosen, and Trump has seemingly endorsed the choice: House Minority Leader Nancy Pelosi, another woman who has a history of challenging the president.

The 2018 midterm elections marked the Democratic party winning back control of the House of Representatives after eight years of being dominated by Republicans. The Speaker of the House under Republican rule was Paul Ryan, who announced his retirement prior to the election, as CNN reported.

Now his seat as Speaker of the House needs to be filled, and Nancy Pelosi, a woman who has been verbally attacked by President Trump for having a "socialist agenda," as reported by NBC News, looks to be the front runner for the position. As of Wednesday morning, no other challengers have stepped forward.

If 78-year-old Pelosi is chosen as Speaker of the House by her fellow House members, she would be the third person in over a century to hold the position twice in her long career. She was Speaker of the House under President Barack Obama during his first term, according to The Hill, and most notably fought hard to help pass Obamacare in 2010.

Despite the fact that Pelosi has been at loggerheads with Trump since his election, she apparently has the support of the president to back her up.

Trump tweeted on Wednesday morning, "In all fairness, Nancy Pelosi deserves to be chosen Speaker of the House by the Democrats. If they give her a hard time, perhaps we will add some Republican votes. She has earned this great honor!"

More than two dozen Democrats have publicly said they would actively oppose Pelosi as Speaker of the House prior to the election, as reported by CNN, in part because some would like to see a new, younger leadership to take hold in the Democratic party.

Although when NBC News asked Pelosi if she was worried about receiving enough votes to become Speaker of the House for a second time, she simply said "No."

Perhaps she's feeling buoyed by the surprise support from former foe President Trump. After demonizing Pelosi for months along with the rest of the House Republicans, none of whom The Hill expect to vote for her as Speaker of the House, Trump's shift in tone is nothing if not perplexing.

Trump's agenda has yet to be revealed, but if Nancy Pelosi is the woman I think she is, he might be getting more than he bargained for with her as Speaker of the House. I get the sense that she does not suffer fools gladly.