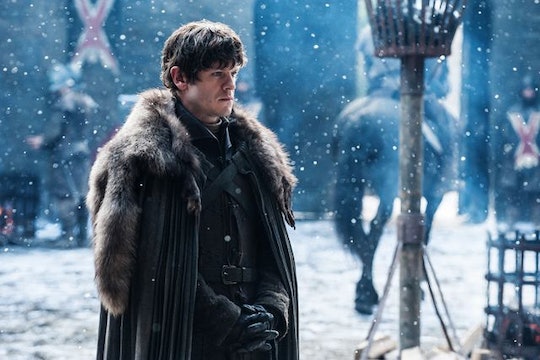 Who Will Kill Ramsay Bolton On 'Game Of Thrones'? There's No Shortage Of Possibilities

If there's one thing certain about the character arcs on Game of Thrones, it's that too many of them come to screeching halts. But that's mostly true for the good guys, unfortunately. Still, Joffrey met his end eventually, as did Tywin, so who will kill Ramsay Bolton? The dude's gotta go, and there is no shortage of people who have it out for him. Since, you know, he's all about that raping, torturing, and flaying life. The closest anyone has come in a long time to doing him in was Osha, the former wildling badass turned Stark loyalist badass.

We all know how that ended though, since Sunday's episode of Game of Thrones saw Osha getting quickly stabbed and killed by the new Lord Bolton himself. Still, we can't help but wonder if that was perhaps some delicious foreshadowing that Ramsay Bolton will die in Season 6, and it wouldn't be a season too soon. It's totally understandable that there has to be a villain in play on Game of Thrones, but when someone like Ramsay is having us long for the days of King Joffrey, then that's kind of a problem.

So who will kill Ramsay Bolton, finally and to the relief of probably every fan everywhere? Take your pick, because honestly he's any man (or woman's) guy at this point.

Since the female knight is all about her vows, we can expect her to stay by Sansa's side until her death pretty much. After vowing to avenge Renly Baratheon, she finally got to by killing Stannis, and she'd made a solid promise to Catelyn to find her girls and keep them safe. Finally, she was able to fulfill that to some degree, so if sticking by Sansa's side and keeping her safe means killing the new bastard of Winterfell, then we can easily see that going down at some point.

Of course there is also the possibility that Sansa will kill Ramsay herself, which would likely be the single most amazing scene of the series so far (other than the Sansa and Jon Snow reunion, of course). And right now, it isn't too far off from what could happen, given Sansa's strength so far this season and the determination she showed in wanting to take back Winterfell and save Rickon. Seeing Sansa be the one to end Ramsay, in a hopefully slow and painful way, would kind of be the perfect way to get rid of him.

If we were to see Jon Snow kill Ramsay Bolton, it would be only second to the satisfaction of Sansa being the one to do it herself. He was brought back for a reason and, as many fans believe, part of that reason was to be able to take part in the Bastard Bowl, battling against Ramsay for control of the north and his home of Winterfell. It would also give Jon a chance to right some of the wrong done to his family, a la the Red Wedding. Not that he needs any more honor, since we're all kind of worshiping him at this point, but you get the picture.

Now that Theon has made his way home, permanently, to the Iron Islands, after living with the Starks for the better part of his childhood and spending a good chunk of time being Ramsay's plaything, we can hopefully see him start to return to normal. As it is, he's ready to back his sister in her claiming control of their land, and from that strength may come some of the former Theon we knew and loved. You know, before all of that burning village boys nonsense. And once he is helping his sister rule the Iron Islands, who's to say that they won't set their sights on Ramsay Bolton to get some major payback? Theon is by no means an innocent, but in the world of Game of Thrones, he's heavily broached on that gray area we've come to accept.

Since it's no longer a matter of if Ramsay will die, but instead how and by whose hands, it's just a waiting game now. As in, we wait for Bastard Bowl to commence and see if he becomes a much needed casualty or dies at the hands of someone else. Either way, homeboy isn't going to last past Season 6 of Game of Thrones.