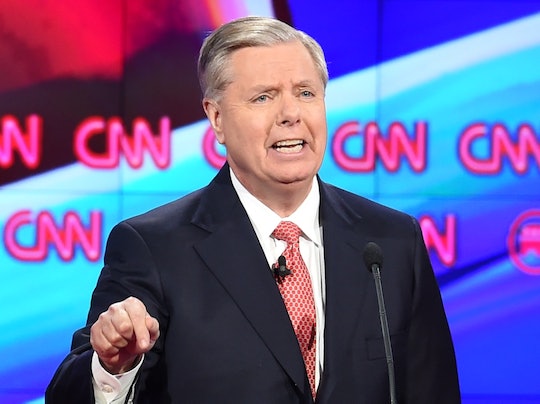 Who Will Lindsey Graham Endorse For President Now That He's Dropped Out? It Definitely Won't Be The Donald

Another Republican is out of the race. South Carolina Sen. Lindsey Graham announced Monday that he will no longer run for president because he believes his campaign has "hit a wall," according to CNN. He may no longer be in the running, but who will Lindsey Graham endorse for president? He hasn't announced a decision yet, but it's likely he won't pick Trump.

NPR reported that Graham dropped out of the presidential race on Monday with an exclusive appearance on CNN and by tweeting out a video to supporters. Since the South Carolina primary withdrawal deadline is today, it's likely he dropped out to avoid losing at home. In the YouTube video announcement, Graham thanked everyone who helped him bring what he believed were important issues to the forefront:

We've put forward bold and practical solutions to big problems like retiring our debt and fixing a broken immigration system. This has been a problem-solvers' campaign. However, the centerpiece of my campaign has been securing our nation. I got into this race to put forward a plan to win a war we cannot afford to lose and to turn back the tide of isolationism that was rising in our party.

Graham went on to say that he was the first Republican candidate to advocate for more boots on the ground in the fight against ISIS. From a national security standpoint, Graham has the respect of many of his fellow Republicans. CNN reported that multiple candidates tweeted to express their gratitude for the veteran's perspective that Graham brought to the race. "Nobody is more clear-eyed about ISIS than my friend @GrahamBlog," tweeted former Florida Gov. Jeb Bush. "As he leaves the race I hope our party & country listen to his counsel."

Florida Sen. Marco Rubio said, "I thought he was one of the most forceful voices on any of the debate stages about rebuilding our military," according to ABC News. Republican presidential candidates Ben Carson, Jim Gilmore, and Rick Santorum all tweeted positively about Graham, and Ohio Gov. John Kasich complimented his national security expertise, writing, "experience matters."

Notably silent on Graham is Donald Trump; the two did not get along well during the campaign. Politico reported in July that when Trump said Senator John McCain is "not a war hero" because he was captured, Graham called Trump a "jackass." Trump followed up by insulting Graham, calling him an "idiot," saying that Rick Perry "probably is smarter," and sharing that Graham once called him for a reference, according to a separate story by Politico. After the verbal attack, Trump read aloud Graham's cell phone number and invited everyone to call it. Graham responded by releasing a video, "How to Destroy Your Cell Phone With Sen. Lindsey Graham."

Even though he's not running for president, Graham will still get to advocate for shifts in military strategy as a senator. Graham's endorsement could really matter, and it probably won't go to Trump. It also probably won't go to Texas Sen. Ted Cruz, whom Graham criticized at a recent GOP debate and whom Graham thought would be the cause of a government shutdown, according to U.S. News & World Report. Instead, people close to Graham say he'll either endorse Bush or Rubio, who share his more hawkish foreign policy ideas, according to U.S. News.

Despite struggling in the polls, Graham's background as both a veteran and a politician positions him to give a meaningful endorsement. He has the respect of many GOP candidates, giving him plenty of options for who he'll ultimately support. But if history is any indication, Graham won't be standing behind Trump anytime soon.