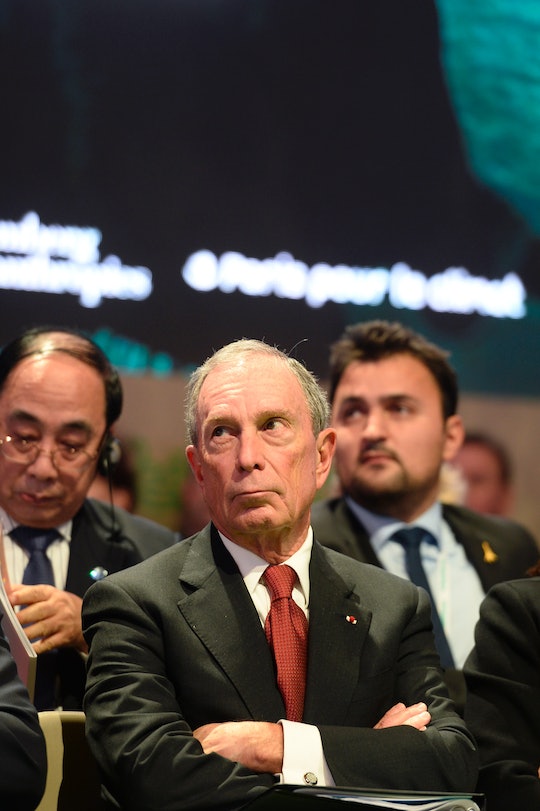 Who Will Michael Bloomberg Endorse For President? He's Not In The Running, But His Voice Still Matters

If you're an undecided voter, former New York City Mayor Michael Bloomberg may have seemed like an interesting addition to the 2016 pool of prospective outsider candidates. But don't get too excited about another option. On Monday, despite hinting that he would be looking into a potential run, Bloomberg announced that would not be running — but who Michael Bloomberg will endorse instead is a question that remains unanswered.

In an open letter on Bloomberg View Monday, the fiscally conservative Republican laid out his view on the primary candidates. In short, he's a little worried about what's going to happen. He wrote that, in his view, no candidate in either party seems to be offering any real solution to the country's problems:

The current presidential candidates are offering scapegoats instead of solutions, and they are promising results that they can’t possibly deliver. Rather than explaining how they will break the fever of partisanship that is crippling Washington, they are doubling down on dysfunction.

He also confirmed that he doesn't seem ready to endorse any candidate from his party just yet, stating,

I am not ready to endorse any candidate, but I will continue urging all voters to reject divisive appeals and demanding that candidates offer intelligent, specific and realistic ideas for bridging divides, solving problems, and giving us the honest and capable government we deserve.

Despite his refusal to publicly back anyone yet, his statement could give voters a few interesting clues. Bloomberg is as establishment as many of the current presidential nominees. Check him out playing golf with Trump, former New York City mayor Rudy Giulianni, President Clinton, and Billy Crystal. He knows what he's doing.

Bloomberg, known as a pragmatist, seems to have run the numbers and decided that entering the race would mean a larger delegate take for frontrunners Donald Trump and Texas Sen. Ted Cruz, both of which he calls "extreme" in their views. He wrote that entering into the race would be playing a role in "electing a candidate would weaken our unity and darken our future." He took a jab specifically aimed at the Trump campaign, writing "we cannot 'make America great again' by turning our backs on the values that made us the world’s greatest nation in the first place." So despite the cheerful photo ops, it looks like he won't be backing Trump anytime soon.

For those not familiar with Bloomberg, he's as much a businessman, but more of a politician, than Donald Trump. As mayor of New York City from 2003 until 2014, he notoriously catered to big business in the Big Apple and fought Occupy Wall Street as much as he took some socially progressive, if limited, stances on public health and LGBT rights. Much like Donald Trump, he could have financed enough of a presidential campaign to throw a monkey wrench in the national primary process. His running would have been a game changer for some independent voters, but could have had a detrimental effect on the way things played out in a general election, which is sort of dependent on the two party system.

So what does that mean for the remaining candidates in the 2016 race? It seems that that Bloomberg may have (temporarily) had a change of heart and may be willing to try something different. Reading between the lines, Bloomberg won't be the saving grace, third party candidate some voters were hoping for, but although he doesn't endorse her outright, it looks like he's willing to vote for either former Secretary of State Hillary Clinton (talk about New York values, right?), or perhaps even Vermont Sen. Bernie Sanders, despite his party affiliation:

I [will not] stay silent about the threat that partisan extremism poses to our nation. I am not ready to endorse any candidate, but I will continue urging all voters to reject divisive appeals and demanding that candidates offer intelligent, specific and realistic ideas for bridging divides, solving problems, and giving us the honest and capable government we deserve.

It seems we won't know who Bloomberg will officially back for some time. But we can at least make a few educated guesses.