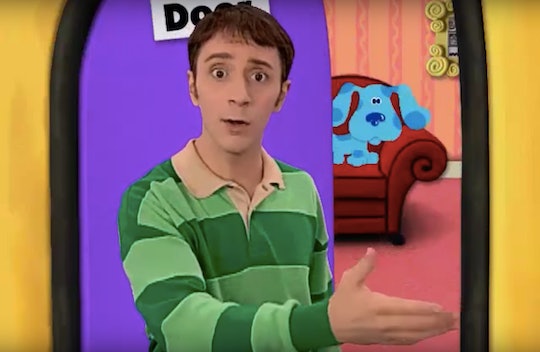 'Blue's Clues' Is Getting A Reboot, But Who Will Play Steve? Here's Who Wants The Job

Ever since the news was announced that the classic 90s children's show, Blue's Clues, is getting a reboot, people have been freaking out, and rightly so. The original Blue's Clues was beloved by so many, and now, the reboot will get a chance to capture hearts, too. But there are still so many questions to be answered, like who will play Steve in the Blue's Clues reboot? Well, as it turns out, a lot of people are gunning for the job, but as no one has landed it just yet.

When Nickelodeon first announced that it was planning on bringing back the fan favorite, a lot of people immediately wondered who would be the host. Back in the day, when Blue's Clues originally aired, there were actually two hosts. But it all started with Steve Burns, who ran the show from 1996 to 2002. And now that Nickelodeon is apparently holding open call auditions, according to Entertainment Weekly, plenty of people want to take that famed spot alongside the animated blue dog — including the Burns, the OG Steve, as People reported.

But, if you want the job, you might have some fierce competition. Along with original host, Burns, John Cena has also voiced his desire to land the gig, according to People. Of course, the requirements to be the next Blue's Clues host might just mean that both Cena and Burns are out of the picture.

While 44-year-old Burns was adamant when he spoke to People about wanting the job again because it required someone people could relate to, there might just be more to the hosting job than being chill. According to Entertainment Weekly, Nickelodeon has specified that it's looking for someone with "a comedy background, a natural connection with the camera, and [is someone who] will empower the home viewer to feel important, respected, and smart." Oh, and applicants should also be able to play someone between the age of 18 to 25, and "playing the guitar, singing, and juggling are all a plus."

So, 44-year-old Burns and 40-year-old Cena might not be what the producers are looking for. Nevertheless, they both seem determined to fight for the position. And Nickelodeon casting has also hinted at the fact that there were plenty of people aiming for the job.

Speaking to People, Burns explained that he was the man for the job because he was more approachable:

So, the question of who will play the new host for Blue's Clues is definitely still up in the air. But one thing is certain: the Blue's Clues reboot will definitely be on point.

Nickelodeon Group President, Cyma Zarghami, explained the company's desire to reboot the show was all about using modern technology to make the classic mystery format of Blue's Clues that much more enticing. "The new, modern version of Blue's Clues will capture all the original's creativity and visual identity for a whole new audience ready for its fun adventures and expertly designed problem-solving curriculum," she explained, according to E! News.

Moms who were kids when the original Blue's Clues aired are likely overjoyed that their kids will now get to enjoy the show. Burns himself even echoed those sentiments, when he told People, "From everything we understand about it, the millennial generation is extra super-duper nostalgic, and to think that they have such warm, fond memories of Blue’s Clues — and of me — is truly super cool and wonderful and warm and fuzzy."

So, will it be Burns? Cena? Or maybe someone new? Whatever the case, fans and kids everywhere will be counting down the days until the new Blue and the gang come back to TV.