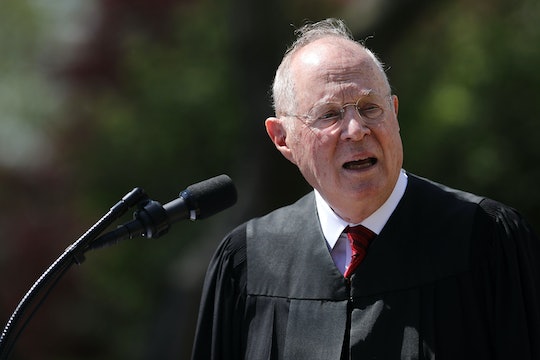 The U.S. Supreme Court is about to undergo a major shakeup. Just one day after the Supreme Court's controversial ruling upholding President Donald Trump's travel ban, Justice Anthony Kennedy announced his retirement on Wednesday following 30 years of service, according to NBC News. Needless to say, Americans have a lot of questions about the retirement, especially where it concerns who will replace Justice Anthony Kennedy. Although it's unclear at this time who will take on the role, it's likely there will be a tense battle over the pick.

In Kennedy's resignation letter to Trump on Wednesday, he expressed gratitude for having a chance to serve on the Supreme Court. “For a member of the legal profession it is the highest of honors to serve on this Court,” 81-year-old Kennedy penned to Trump, according to the New York Daily News. “Please permit me by this letter to express my profound gratitude for having had the privilege to seek each case how best to know, interpret and defend the Constitution and the laws that must always conform to its mandates and promises.”

Although it was long rumored Kennedy had plans to retire, his departure — slated for July 31 — is unnerving to many. For starters, Kennedy is considered a swing vote. And as the Associated Press reported, Trump can nominate someone who could "cement conservative control of the high court." If Trump picks a staunch conservative as Kennedy's replacement — which he'll likely do — Roe v. Wade could be overturned, for example.

So, it's really no surprise people have concerns about Trump's potential replacement — especially given the Trump administration's unconstitutional policies of late.

"The replacement of Justice Kennedy with a reliable conservative would be far more consequential and would move the court markedly to the right," one person penned, according to Twitter. "We are in the beginnings of a Paradigm Shift, this will change our Country, and not in the way we want. Im not worried. Im scared!

"If you weren't worried before...with SCOTUS JusticeKennedy resigning you better be worried now," another commenter wrote. "If they get another conservative in that seat Roe V Wade, Gay Rights...it'll all be on the line. Welcome to the Handmaid's Tale in real time.

"Justice Kennedy, while not perfect, was able to put politics to the side while on the bench. He was the swing vote," another person chimed in. "He wrote one of the most beautiful opinions in the case for marriage equality. I am scared."

"Just burst into tears reading of Justice Kennedy’s retirement," someone else agreed. "So scared and SO FURIOUS. My Body My Choice until I die."

Yeah, I think it's safe to say people are upset by this retirement. It's very scary to consider what the future holds now that Kennedy is out of the game.

At this time, it's not clear who Trump will choose. What is obvious, however, is Trump's intention to confirm the new pick ASAP.

McConnell's shenanigans aside, it's important to discuss what can be done in the coming months. First off, research all of the potential nominees so you'll be armed with information when Trump makes his pick. It's easier to fight against a potential nominee when you're informed.

Next, call your representatives about Trump's likely plan to confirm Kennedy's successor before midterm elections in November. Argue it's only fair for the Senate to wait until after midterms to vote on Trump's pick.

In short, keep your eyes on the ball. Although Kennedy's retirement is understandably discouraging, Americans still have the opportunity to have their voices heard in this important matter.