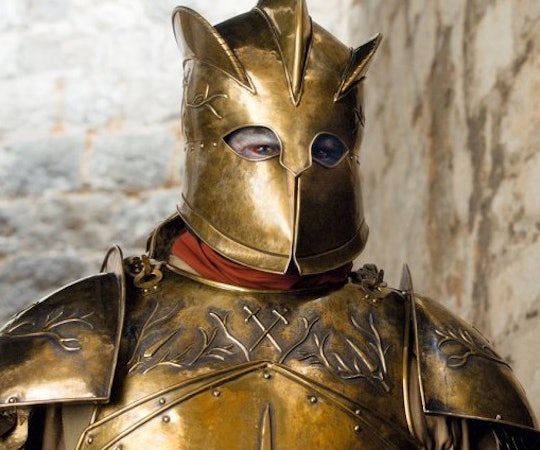 Who Will Win The Cleganebowl On 'Game Of Thrones'? Cersei Won't Play By The Rules

If you're at all immersed into the world of Game of Thrones, then you've undoubtedly heard all about the Cleganebowl theory by now (get hype). But in a fight between Sandor Clegane (the ruthless Hound) and Gregor Clegane (the zombified Mountain), who will win Cleganebowl on Game of Thrones? First, The Hound has to actually come back, but since we never saw him actually die when Arya left him to do just that on the side of a, well, mountain, we can safely assume that he's doing just fine. Now that Margaery's walk of atonement was cancelled, and she and Tommen will be leading with The Faith at their side from now on (which we'll just patiently watch, since she has to have something up her short sleeve), the next thing we've got to see is Cersei's trial-by-combat.

In the traditional trial-by-combat, as we've seen in Game of Thrones twice, the one standing trial must fight an opponent or name someone else to do it for them. Whoever wins, a.k.a. is the one left alive, is the winner and if that happens to be the person on trial then they are free to go. In Episode 3 of Season 6 of Game of Thrones, Cersei announced that she would require a trial-by-combat with The Mountain as her champion to fight against the Faith. As we all know, the Faith seems to be full of nothing but monks in ill-fitting potato sack dresses and dirty bare feet.

But in the books, another monk of the Faith is made, and that is where Sandor Clegane comes (back) in. In the books, Septon Maribald gives an important speech about broken men, and the theory is that in his speech there are underlying themes about Sandor Clegane losing the part of him who is The Hound. It should be noted that the next episode of Season 6 of Game of Thrones is titled The Broken Man, and since the theory goes that Sandor will return as himself, shredded of The Hound persona and living as a monk with the Faith, he will be the champion for them.

Ian McShane is set to appear in Episode 7, and while it's been all but confirmed that he will be playing Septon Maribald, let's just assume that's the role he'll be taking on. In the books, the Septon helps Brienne and Podrick make their way through the Riverlands, which is exactly where they're headed in Game of Thrones at the moment.

But, who will win the Cleganebowl when it finally goes down? While the "rules" of a trial-by-combat mean the loser is sentenced to death if their champion dies int he combat, I can't see Cersei succumbing to this. She's a Lannister, and pretty high up on Arya's hit list. There's no way she's going to leave Game of Thrones by execution, so we can just forget that right now.

If the Cleganebowl ends with The Hound dead, it would feel like he was brought back for nothing. To have him fight the same brother who disfigured him as a kid, only to be defeated by the massive Mountain will just add to the legitimately sad story of The Hound. If the Cleganebowl results in the death of The Mountain, though, there's no way Cersei will allow the Faith to execute her. Even though Tommen and Margaery, who is the rightful queen of Westeros now, are backing the Faith publicly, Cersei would no doubt try to appeal to her son. And Jaime would be doing everything he could to stop it, likely leading an army from Casterly Rock to King's Landing.

The winner of the Cleganebowl probably won't determine Cersei's fate, since she obviously plays by her own rules. But, it will still be a trial-by-combat to make the history books.