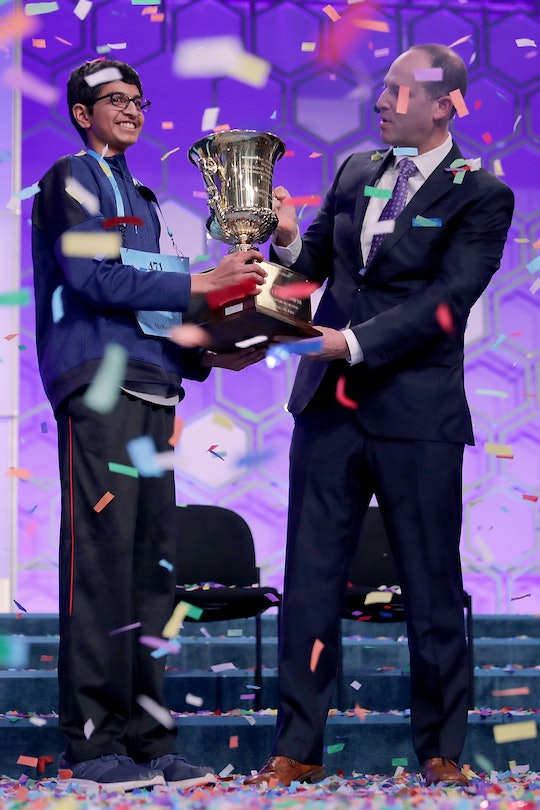 Sure, you might be able to spell words like hippopotamus and kaleidoscope at the drop of a hat. But the winner of the 2018 Scripps National Spelling Bee, Karthik Nemmani, is clearly one smart cookie and can absolutely spell faster and better than all of us. On Thursday night, the 14-year-old Texas native was named the champion of the annual competition after he aced spelling a pretty tricky word, according to The Washington Post.

Nemmani, who hails from the Texas city of McKinney, beat out more than 500 other kids with his expert spelling of the Greek word “koinonia” (pronounced as koy-nuh-nee-uh), BuzzFeed News reported on Thursday night. In case you were wondering, "koinonia" means "the Christian fellowship or body of believers" or the "intimate spiritual communion and participative sharing in a common religious commitment and spiritual community," according to Merriam-Webster's definition of the winning word.

After seeing footage and photos of Nemmani's win, you can see just how thrilled the eighth-grader was to be declared the winner of the 91st Scripps National Spelling Bee. "I’m just really happy," he said after he won the coveted title, according to The Washington Post. "This has just been a dream come true."

Though it's clear that Nemmani was able to keep his cool under pressure, the stakes were definitely high; the winner of the spelling bee is awarded "more than $42,000 in cash and prizes," according to CBS News. All those flashcards certainly paid off.

Nemmani isn't only a whiz at theological words. According to TIME, the teen also spelled “haecceitas,” a Latin word, which means "the property that uniquely identifies an object," according to The Free Dictionary. Nemmani also beat out the 16 remaining student on Thursday night after spelling other tongue-twister words that might take a few attempts to sound out let alone spell, like "lophophytosis," "pseudepigrapha," "propylaeum," and "ooporphyrin," according to BuzzFeed News. Are you seeing double yet?

Needless to say, people on Twitter were totally impressed with Nemmani and all the other talented kids who competed in the spelling bee.

Still, some people were stumped by the vocab the judges the selected, but these kids were totally prepared.

What's even more impressive about Nemmani's defeat is that the Texas teen — who CNN described as "soft-spoken" — hadn't competed in the National Spelling Bee before this year, though he had been in many spelling bees in his county. But that didn't shake his confidence, as he told CNN after his victory, he knew he could spell "koinonia" as soon as he "heard it."

Nemmani did have some tough competition on Thursday night. According to TIME, he was up against 12-year-old Naysa Modi, also from Texas, until she misspelled the word “Bewusstseinslage” in competition's final round. She's quite the champ herself, though, perfecting words like "videlicet," "succiniferous," and "forçat," as BuzzFeed News reported.

Now that Nemmani has been crowned the winner of this year's National Spelling Bee, what will he do with his winnings? It's broken down into a few categories; according to The Washington Post, he'll get a $2,500 cash prize from Merriam-Webster, $40,000 as well as that fancy trophy from the Scripps National Spelling Bee organization, and he'll get to do some traveling to places like New York and Hollywood. The best part of all, though, might be the pizza party he can throw for his school from Pizza Hut.

All of Nemmani's hard work with his nose in the books definitely paid off and the awards he got tonight are so well deserved. Now, if you'll excuse me while I dust off my old dictionary....