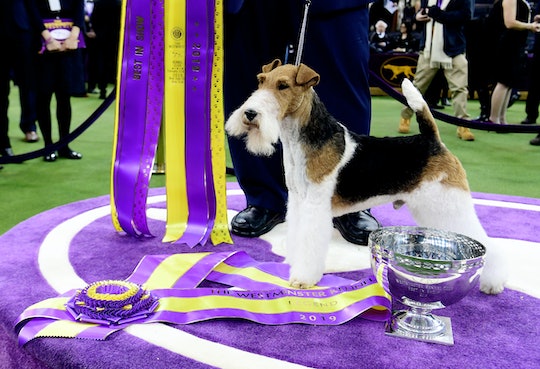 What's in a name? Usually nothing (my sister's name is Grace, and she trips more than anyone I know), but sometimes, there's a prophetic nature to them that indicates how the trajectory of your life will go. That's definitely the case for King, the winner of the 143rd Westminster Club Dog Show and took home the prize for being the official best dog in the world for all intents and purposes. But seriously with a name like that, how could he not have taken home the crown?

Regardless of his oh-so-appropriate name, any close followers of the Westminster competition weren't surprised by King's victory, though they might have been more than a bit disappointed because of how un-shocking it was. As the New York Times reported, the wire fox terrier is the 47th terrier to win the show; of those 47, over 15 wire foxes have taken home the top prize. Talk about a dynasty. The Times also pointed out that King's win was met with "Boos and grumbles [that] filled Madison Square Garden," highlighting the fan fatigue when it comes to terrier wins at the Westminster show. The disdain seems a bit dramatic considering the fact that a terrier hasn't won the competition since 2014 according to Westminster's records, but the boos don't lie. Listen for yourself.

Yikes. I'd feel sort of immoral cheering against any dog, but maybe that just means I don't have the stamina for these kinds of competitions. The heightened tension in the arena might have also come from the fact that King's win seems like a bit of a steal for fans of a schipperke named Colton, who was not allowed to participate in the best in show competition after "a disqualifying relationship between the dog’s owners and the family of the judge of best in show" was exposed, as reported by NJ.com. Scandals like these are not unheard of in the dog show world (imagine if dogs could take performance enhancing drugs, my god), but they don't usually happen at a competition as elite as the Westminster Show, so it shocked dog enthusiasts everywhere.

Colton was a favorite for the big title after he won the non-sporting group competition as listed on the Westminster Show site, so fans were sad to see him leave, especially because it's not his fault his owner knew the best in show judges. Clearly, King ended up taking home the prize, and he seemed to get no love from the public after his win, with some fans calling for justice for Colton while others criticized judge bias towards terriers, and many continued to root for a dachshund instead. Seriously, dog competition twitter was pissed with how things ended up.

As you can see, people weren't feeling the puppy love for King. But isn't that always the way for a monarch? Perhaps the Westminster Club will consider different judges next year or will take another look at some of their more outdated rules, but King's victory stands for now. And despite the controversy, I still think he looked cute as a button at the crowning ceremony. But who am I to judge?

More Like This
The Cutest New Holiday Jellycats, From A Yule Log To A Santa Lobster
9 Winter Gardening Tips To Keep Your Plants Pristine
Gemini, 2023 Will Be A Year Of Slow & Steady Changes
10 Baby’s First Christmas Outfits Cute Enough To Save For Their Kids