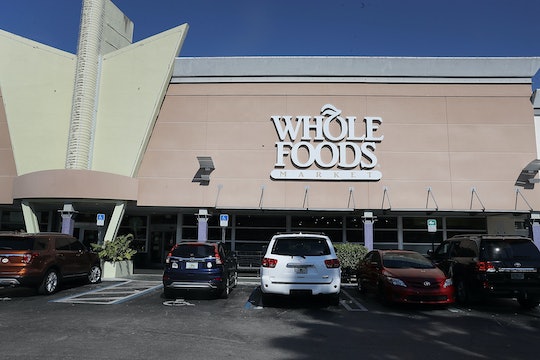 The prepared foods section at Whole Foods is a pretty great option when you're looking for a healthy bite on the go. But after a recent recall of baby spinach and mesclun by manufacturer Satur Farms, Whole Food has recalled select prepared food products due to possible salmonella contamination, according to The Washington Post, and it's definitely something you'll want to be aware of if you've purchased any items there recently.

On Wednesday, Whole Foods shared Satur Farms' recall announcement regarding the recalled spinach and mesclun, and a day later, the grocery chain issued its own voluntary recall for various prepared items containing baby spinach — including salads, pizza, sandwiches and wraps — due to the potential for contamination.

Unfortunately, the list of recalled products is quite long, and given the nature of prepared foods, it's probably likely that those who purchased the recalled items ate them soon after (according to the FDA, the latest sell-by date is Jan. 28). But if you live in Connecticut, Florida, Maine, Massachusetts, New Hampshire, New Jersey, New York, or Rhode Island, and think you may have a spinach-containing salad, pizza, or sandwich hanging out in your fridge, you'll probably want to double check the product code, and get rid of it immediately if it's one that's been recalled.

So how can you tell if you've actually purchased a recalled item? The first thing to consider is that if you've bought any food containing spinach from a Whole Foods salad or hot food bar in one of the states affected by the recall before Jan. 23, you'll definitely want to discard it right away. But if the item you purchased was a prepared one, the place to double check is going to be the Whole Foods scale label (pictured above).

The FDA published the full, 54-item list of affected products, along with product codes, sell-by dates, and the specific states where the recalled items were sold, but unfortunately it's pretty much made entirely up of things that sound delicious when you're pressed for time and super hungry, meaning they were probably eaten shortly after purchase. The good news at least? The original Satur Farms recall indicated that, despite concerns about contamination, there have been no reported illnesses.

Even before the Whole Foods recall though, salmonella contamination has seemed to be somewhat of a regular occurrence in the United States in recent years. Less than a month into 2019, and General Mills flour and Hy-Vee cheesecake have already been recalled due to salmonella, for example, while a recent report found that, actually, the number of general food recalls was 10 percent higher in 2018 than it was five years earlier, according to USA TODAY.

Salmonella contamination isn't *just* a concern when it comes to food manufacturing though: according to the Centers for Disease Control, salmonellosis can occur through improper food handling and preparation, and it can also spread from person to person, or from animals to people. That's why the CDC recommends thorough hand washing before, during, and after preparing food; rinsing produce under running water before consuming; and avoiding cross-contamination between raw meat, poulty, and seafood and other food items by using separate cutting boards and knives to prepare them, and keeping those foods separate from other items in the fridge.

Additional tips you'll want to consider to keep yourself safe from possible salmonella contamination? The CDC advises ensuring that foods are adequately cooked to a high enough internal temperature (which can differ depending on the food item), and that any food not meant to be consumed immediately be promptly refrigerated.

Salmonella is definitely one of those things that no one ever really wants to think about, but given how sick it can actually make people, it's something that's worth having on your radar. And though there may not have been any real way to know ahead of time that the Whole Foods sandwiches, salads, and wraps included in the recall may have been contaminated, hopefully news of the recall can at least help ensure that any remaining items will be thrown away immediately.