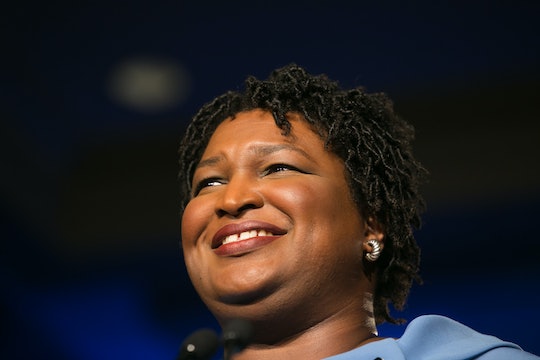 Now that the government shutdown is off and Congress is back to work, plans for Trump's State of the Union address are falling into place. The nationally-televised event will take place on Tuesday, Feb. 5, and a well-liked, rising political superstar is poised to take the stand after Trump is done. So, who's giving the Democratic response to the State of the Union? Stacey Abrams is reportedly poised to make history by becoming the first African American woman to give the rebuttal on behalf of her party, as her spokesperson told CNN.

Today, Senate Minority Leader Chuck Schumer announced the news to reporters on Capitol Hill, according to ABC News. Rebuttals are always given by the party that is not occupying the White House, as USA Today noted.

Abrams served as the Georgia House Speaker for over six years, per ABC News. And, most recently, she garnered national notoriety during a contentious race for Georgia's governor seat. She ultimately lost her bid to become Georgia's first African American female governor — which would have been two huge firsts for the state, according to ABC News.

She lost by just 50,000 votes to Georgia Secretary of State Brian Kemp, and accused him of voter suppression, which lead her to launch the legal organization Fair Fight Georgia, according to the group's website. And while that might seem like a lot of votes, it's only 1.39 percent of the total votes tallied, according to USA Today.

Representative Joe Kennedy III of Massachusetts gave the Democratic rebuttal to the State of the Union last year, according to The Hill and he gave Abrams some advice in a tweet on Tuesday. He told her to be herself, have lots of snacks on hand, continue to fight the good fight, and leave her lip balm at home. But, perhaps most importantly, he told her to remember that many Americans are rooting for her.

And if you're wondering what the Chapstick remark was all about, Kennedy was teased on social media for his lips being too shiny while he gave his rebuttal, according to The Hill. By now, it shouldn't be a surprise that people are this critical, but it's nice that Kennedy wanted to help Abrams avoid a similar fate.

Voters can expect to see a lot more of Abrams. This rebuttal should give her a boost and a national platform, potentially setting the stage for her to run for office again in 2020 if she so chooses, according ABC News.

"At a moment when our nation needs to hear from leaders who can unite for a common purpose, I am honored to be delivering the Democratic State of the Union response," Abrams said in a tweet.

Xavier Becerra, California Attorney General and former house member will give the Spanish language rebuttal for the Democratic party, according to CNN.

This is Trump's second State of the Union address, which was postponed during the partial government shutdown. It's unclear what, exactly, the president will choose to address in the speech, but you can almost certainly bet that you'll hear something about a wall.