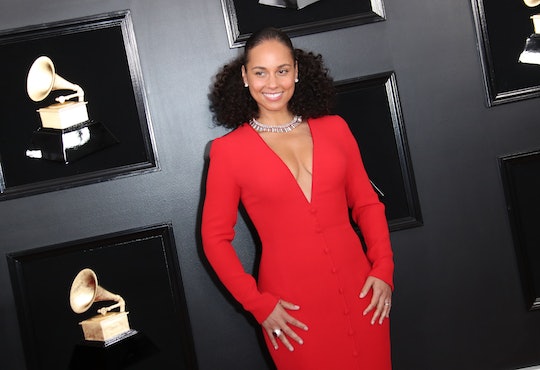 Alicia Keys Was Such A Great Grammys Host In 2019, She's Doing It Again Tonight

The biggest night in music takes place tonight — Sunday, Jan. 26 — and the host of the 2020 Grammy Awards, Alicia Keys, is guaranteed to deliver an evening to remember. How do I know this? Because the accomplished musician has done it before and totally rocked it.

More Like This
Angelina Jolie Reveals Her Six Kids Are “Amazing” At Mother’s Day
Exclusive: Teen Artist Tyler Gordon Reveals The “Ultimate Hero” He Wants To Paint
Halle Berry Shared A Beautiful Throwback Pregnancy Photo On Mother’s Day
Queen Elizabeth Has Given Her Royal Approval For A New Line Of Beer

Throughout her career, Keys has been nominated for 29 Grammys, has won 15, and will now host the awards show for the second time. Keys first hosted the Grammys in 2019, becoming the first woman in 14 years to do so, and told Billboard in a statement in November that she is so excited to do it all again. "At first, I did think last year was a one-time thing but when the opportunity came back around, there was no question returning as a host," she told the outlet. "Last year was such a powerful experience for me. Not only did I feel the love in the room, but I felt it from around the world and it confirmed the healing and unifying power of music."

Keys made the exciting announcement in November in a hilarious video posted to her YouTube channel paying homage to the outfits she wore during the 2019 Grammy Awards.

You may remember that Keys was a total hit with viewers in 2019 and, what's more, her hosting performance was positively reviewed by critics, according to the Los Angeles Times, which applauded her for her laid back approach. As the host of the 2019 Grammys, Keys brought Michelle Obama and Lady Gaga on stage for her opening monologue and performed an incredible medley of songs on two pianos at the same exact time, so there's really no telling what she'll will bring to the table this year.

The 2020 Grammy Awards are expected to be exciting. For starters, you can look forward to live performances from Lizzo and Billie Eilish, while Aerosmith will perform a medley of their greatest hits from their expansive career in music. Additionally, the cutest couple on The Voice, Blake Shelton and Gwen Stefani, are also slated to perform on the Grammy stage for the first time together.

And Keys will surely bring back some incredible performances and that same energy when she returns to host the 2020 Grammys tonight.