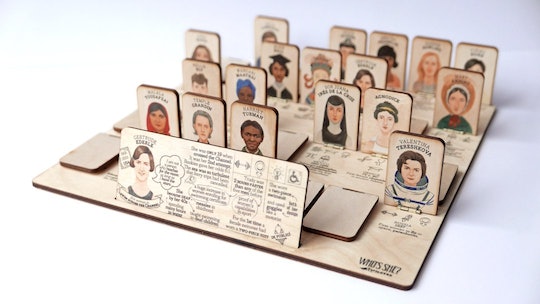 This Board Game Is The Feminist Version Of Guess Who? & *Applause*

Remember the quintessential '90s-kid game Guess Who? Remember the original version's lack of diversity and its focus solely on the physical appearance of the characters? The Who’s She? board game by Playeress is the guessing game about trailblazing women, by women who took the blueprint of the classic game (identifying your opponent's identity by describing their looks) and gave it a modern, feminist twist. It’s now available for purchase in six different languages and ships to anywhere in the world out of Warsaw, Poland.

In Who's She, instead of focusing on the characters' looks, players guess their opponent's identity (one of many female heroes) by asking about her accomplishments. Did she win a Nobel Prize? Did she make a discovery? Was she a spy? Is that empowering AF or what?

Laser-engraving enthusiast Zuzia Girard-Kozerski is the mastermind behind the Who's She? game as well as Valek, a line of embossed rolling pins. Her craftsmanship is evident in the precision cuts of each wooden game piece. The watercolor illustrations come from illustrator and graphic designer Daria Golab. This game is as beautiful to look at as it is fun and educational and available in two materials: baltic wood for $84 and cardboard for $17.

The game comes with two playing boards featuring 28 powerhouse women in history — from Harriet Tubman to Malala Yousafzai. Each biography card features a quick summary of the life stories of these incredible women. The included fun facts and anecdotes are written to "inspire you to dream bigger and take risks," according to the game's Kickstarter page.

If you want to win the "most awesome gift" award, there's the "Who's She?" personalized game, where any awesome woman in your life can be featured with their very own hand-painted portrait and story included. You can also snag the scratch-off postcard ($6) featuring six of the game's extraordinary women or the scratch-off poster ($12) featuring all 28 women. I can't wait to get this game. More than a game, it's a beautiful piece of girl power to hand down to generations to come.