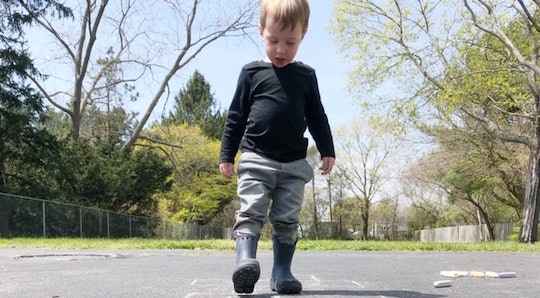 “Mama, what’s your head shape?” my 2-year-old asked me in between bites of his tunafish sandwich. He quickly followed up with, “Mine is O shape, yea, O shape…”

It’s questions like these that make me stop and think about how crazy it must be to be just starting to figure out the world, spending your days pondering life’s great mysteries like head shapes, where your poop goes after you flush the toilet, and why ketchup isn’t a food group. It’s these kinds of interactions that confirm my suspicion that 2-and-a-half is the best age ever.

When my son was approaching his second birthday I was semi-terrified. Two-year-olds usually get a bad rap and rightfully so, sometimes. They have almost zero impulse control, their brains seem to think their bodies are far more capable than they actually are (you know what I mean if you’ve ever watched a 2-year-old try to button and zip their own pants) and they really DGAF about your plans for the day — especially if they involve some form of shopping. They have hair-trigger tempers and will absolutely lose it for reasons you could have never fully prepared for, such as (but not limited to) not letting them wear two different shoes, or not giving them the “right” cup with their breakfast (how DARE you?!). But in between these moments of chaos and craziness they become your baby again and want you to kiss their booboo finger or rock them to sleep and it instantly makes up for all the other stuff. Its like all day long they’re doing this delicate dance of wanting to fight for their independence but at the same time needing you desperately, and you are just along for the ride.

I spend half the day wondering when he got so big and the other half sniffing his little head because it still smells like a baby.

With their newfound independence comes a lot of skills that make parenting a heck of a lot easier. They can tell you what they want or need and caring for them becomes less of a guessing game. They may be able to dress themselves (albeit at a snail’s pace), clean up after themselves to a certain extent and are eager to help. Hand my kid a squirt bottle and a rag and he will “dust” far more happily than you will ever see me dusting. They start to play by themselves a bit more and you don’t have to be on top of them making sure they’re not putting weird stuff in their mouth — freeing you up to take trips to the bathroom in relative peace. They’re finally at a place where you can loosen the reigns a little bit and enjoy watching them interact with the world.

I feel like most days, I spend half the day wondering when he got so big and the other half sniffing his little head because it still smells like a baby. I am amazed at the person he is becoming, mostly because I recognize parts of myself in him, and it’s just mind blowing to me that this tiny person was once just a gummy bear sized blip I saw on an ultrasound. I savor the new found freedom that his independence allows me but at the same time cling to the moments when he needs me. For us, 2-and-a-half seems to be the perfect balance between having a baby and having a kid, and I want to wallow in the in-between as long as we can.