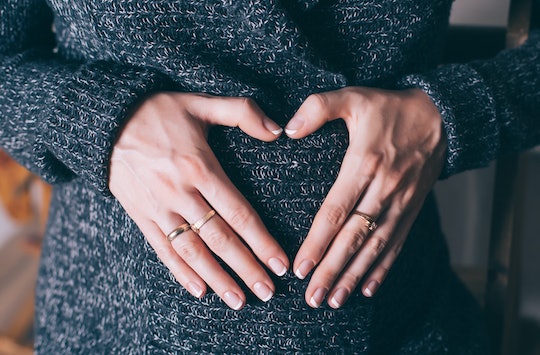 Why You May Be Cold During Pregnancy

So many bizarre things happen to your body during pregnancy that it can be hard to keep track of what's normal and what might warrant a visit to the doctor. Many pregnant women complain that they're constantly hot and sweaty, and find themselves dreading the summertime when the problem is sure to be even worse. But some moms-to-be have the exact opposite issue. If you've ever found yourself wondering, "why am I always cold during pregnancy?", there's usually a pretty simple explanation.

As with many mysterious pregnancy symptoms and discomforts, hormones are to blame. As The Bump reported, pregnancy can kick your metabolism into high gear, which in turn can make you feel warm. Your body then tries to cool you down, but in some cases it can get a little carried away— leaving you cold and reaching for another blanket or sweater.

In some cases though, there may be a more serious explanation. “I would usually do a thyroid study, just to make sure that they’re not hypothyroid, because that can be an indication of why they’re feeling cold,” Dr. Sandy Dorcelus, an obstetrician and gynecologist associated with NYU Langone Health, tells Romper. If you think this might be the reason you're constantly cold, it's important to run it by your doctor since an untreated thyroid deficiency can lead to a bunch of other serious issues according to the UK's National Health Service.

Feeling cold during pregnancy could also be due to issues with your diet, according to the New Kids Center. Not getting enough to eat and losing weight can both leave you shivering, as can not getting enough iron. While reaching for a sweater and feeling chilly may not strike you as a big deal, it’s not necessarily something you should ignore, according to Dr. Nicole Smith, the clinical director of maternal fetal medicine at Brigham and Women’s Hospital. “While it is likely to just be hormonally-driven changes in body temperature regulation, discussing it with your obstetric provider is important so he or she can determine if any additional testing is indicated,” she says.

Feeling cold while pregnant is a problem I can in no way personally relate to. My body's efforts to cool me down while I was pregnant with my daughter apparently failed spectacularly. Despite having a winter baby, in my last few weeks of pregnancy I could often be found rocking a tank top and flip-flops and guzzling ice water because I was always so uncomfortably hot. While stories like mine seem to be a bit more common, feeling cold can be perfectly normal as well. And of course, sometimes the simplest explanation is the right one. Feeling cold or chills may be a sign that you're coming down with something, according to Parents, so don't forget to take care of yourself.

This article was originally published on March 30, 2017