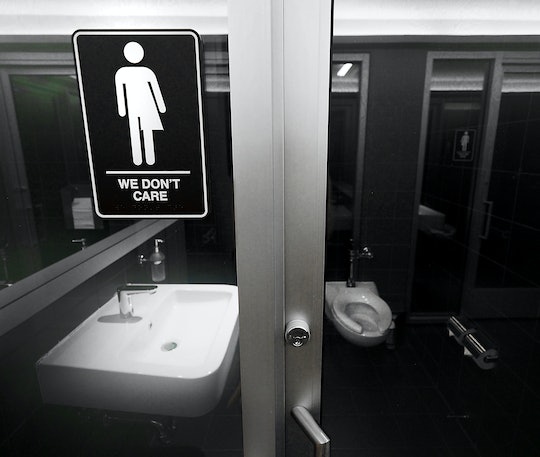 Why Anti-Trans Bills Are Pointless, According To A Former 911 Operator

Lately, it seems like the government is really interested in our bathroom habits. What was once a private occurrence has come under scrutiny with the emergence of so-called “bathroom bills.” These bills attempt to curtail the rights of transgender Americans by forcing them to use the restroom that corresponds to the gender listed on their birth certificate and not the gender with which they identify. But according to one former 911 operator, these anti-trans bills are pointless.

Why do legislatures want to police a bodily function, you may ask? Well, according to those who support these discriminatory bills, it is all for the sake of the children. Lawmakers frame these steps as protective measures against sexual predators. Former Republican presidential candidate and Texas Sen. Ted Cruz argued that by not passing these laws, “you’re opening the door to predators.”

“Should a grown man pretending to be a woman,” the senator posited in a campaign video, “be allowed to use the women’s restroom used by your daughter, your wife?” The common sense answer is “of course not.” But Cruz is missing a huge point: Transgender females are not “pretending” to be women, they are women.

Twitter user @deathtodickens took to the platform to point out the serious flaws in bathroom bill lawmakers’ argument. A self-proclaimed “average queer WOC in her 30s,” Dickens is a writer and illustrator who moonlighted as a 9-1-1 dispatcher in California for nine years. During that time, she can only remember three calls about transgender women and in every case, the woman was the victim.

“Spent my evening thinking about how every 911 call that I have received about transgender women was made in an effort to save her life,” Dickens tweeted last Friday. She then noted that these women were victimized because of their gender identity, writing, “It is always the catalyst for the events that followed.”

Dickens said that her time working at 911 “only enhanced [her] support for the transgender community at large and against transphobic bathroom bills.” She spoke with Fusion about her tweets and her experiences with transgendered individuals as a dispatcher. Two of the three cases she recalled were trans women reporting an assault to 911. “One of those women had a shotgun pulled on her by the man she was on a date with, not their first, after she’d revealed to him that she was transgender,” Dickens said. She continued retelling the horrific tale:

They were in a moving vehicle, he threatened to kill her, and refused to let her out. Not until they were in the middle of nowhere did he stop and let her go. She was able to call 9-1-1 but he had already gone.

One time, a trans woman called 911 to report her own suicidal thoughts. The woman was “newly transitioning, dealing with intense and unwanted opinions on her transitioning, and threatening self-harm.” To have a sympathetic voice like Dickens on the other end of the line, was most likely invaluable.

Dickens has experienced calls where someone wants to report on a trans individual as a possible suspect, but she dismisses them as mostly driven by prejudice. “We receive so many calls about suspicious persons and activities wherein the extent of the suspicion doesn’t move past the physical description of the suspected,” she told Fusion. “Too often we have to question why people are wary of a particular person and too often we are met with unfiltered commentary that is biased, prejudice, and uncalled for.”

Her series of tweets continued as Dickens explained why enacting these discriminatory bills has nothing to do with protecting the public. “I really wish people would wise TF up and stop using bathrooms as an excuse to be transphobic,” she wrote. “Stop using your children as a cover for hate.”

“If you think I spend my days answering phone calls about children being abused by transgender folks in Target bathrooms,” Dickens tweeted. “Rethink.” Her experiences as a 911 dispatcher confirm what a number of pro-trans groups have discovered about transgendered individuals and crime. The Transgender Law Center, National Center for Transgender Equality (NCTE), the Human Rights Campaign, and the ACLU have all come out and said there is no statistical evidence of violence that justifies this kind of legislation.

The director of communications for the NCTE Vincent Villano told Mic that his organization has “not heard of a single instance of a trans person harassing a non-transgender person in a public restroom.” He continued, adding, “Those who claim otherwise have no evidence that this is true and use this notion to prey on the public’s stereotypes and fears about transgender people.”

In an interview with the Miami Herald, Ashley Flattery, an advocate at the Alachua County Crisis Center in Florida, asserted, “This kind of idea that someone is going to be assaulted in the bathroom by someone, and claim they have the right to be there because they are trans, is imaginary.”

These facts poke a giant hole so big a train could pass through it in the argument of pro-bathroom bill lawmakers. If there is no evidence of transgender individuals using their gender identity as an excuse to commit crimes and assault others, why do these laws need to be enacted to “protect the children?” As Dickens wrote, “Not only are you hurting transgender people when you do that shit, you’re doing your own kids a horrible disservice.”

She has a point. The hateful rhetoric surrounding bathroom bills and trans rights not only spreads transphobic myths, it can distract from the real predators that put children at risk.

“Almost every day we receive calls about children being abused by straight cis men,” Dickens explained to Fusion. “And, more often than not, these men are close to them. Relatives step-parents, teachers. People they know, people they are supposed to trust.”

93 percent of sexually abused children know their abuser personally, according to the Rape, Abuse & Incest National Network. It’s a fact that can puncture the bubble of safety parents feel they’ve created around their children. As Dickens points out, “We teach our children not to trust strangers from a very young age but rarely do we teach children to question the adults in their lives.”

The whole concept of “stranger danger” is easier for parents and children to accept when the reality is danger does not always come from the unknown. Dickens’ tweets suggest that ignorance is fueling these bills and putting children in danger for that exact reason. “It’s asinine that people act like sexual assault doesn’t exist until they can convince themselves the perpetrators don’t look like them,” she wrote. “News flash: They look just like you. Play straight like you. You probably know them. You may even trust them & you’d never suspect them.”

It is a lot scarier for parents to accept that people they know may be harming their children than believe in some mythical trans predator who assaults children in public bathrooms. The latter, if it were true, would be much easier to fix.

If these lawmakers were really that concerned about protecting the children, as they say they are, why don’t they come up with bills limiting kids time spent with cis straight males they already know? Because, as with a lot of things, the so-called bathroom bills have nothing to do with what lawmakers claim they do.

In reality, the “for god’s sake, won’t somebody think of the children” gambit can be found throughout the last century as an excuse to enact discriminatory and reductive laws. It was used to keep women from seeking fulltime employment outside the home. It prevented LGBT folks from marrying or adopting children together. You can probably find the argument at the heart of segregation, the war on drugs, and mandatory minimum sentencing.

Why don’t we just call these bathroom laws what they are, discrimination wrapped in a mask of public safety. Dickens is right, these bills are totally pointless.