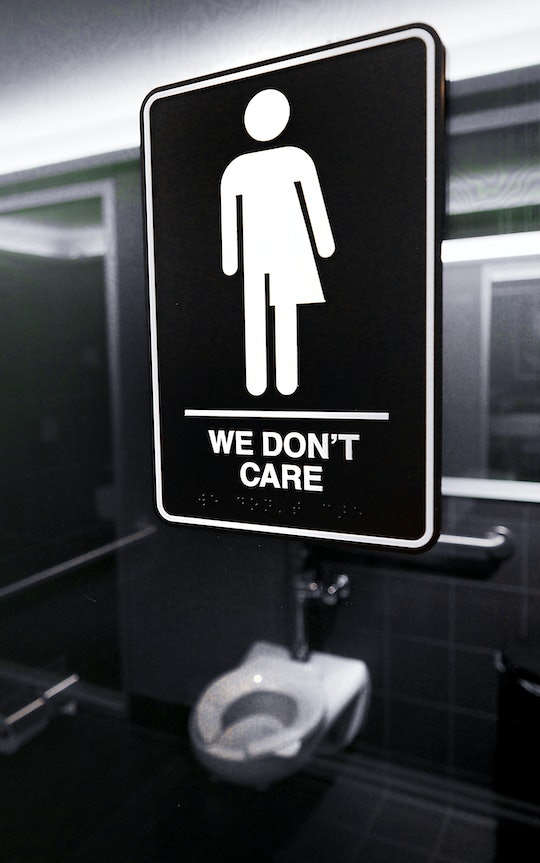 The fight over transgender bathroom rights continues to heat up, with everyone from the U.S. Justice Department to Bruce Springsteen weighing in on the North Carolina bill that forces transgender people to use bathrooms that correlate with the gender they were assigned at birth, rather than the gender with which they identify. Over the weekend, even Duck Dynasty's Phil Robertson threw his opinion out there, claiming he didn't want a man sharing a bathroom with his daughter. That's a common sentiment among those championing bills like the one in North Carolina. But despite the rhetoric, these anti-transgender bathroom bills aren't about protecting children. They're about transphobia.

Since Robertson is apparently an "influential" person "worth taking seriously," he sent out a mass email to conservatives asking for donations to help in the fight to restrict bathroom freedom. According to The Hollywood Reporter, Robertson wrote:

He also went on to say that efforts to allow transgender individuals to maintain their dignity and safety in restrooms showed that we in America were "slowly losing our soul." Okay.

Here's the issue. Though proponents of the North Carolina bill say they want to protect women and children, the idea that ordinances allowing transgender people to use the bathrooms in which they feel comfortable lead to spikes in sexual assault or harassment has been shown, time and time again, to be false.

The American Civil Liberties Union, the National Center For Transgender Equality, and the Human Rights Campaign are just a few of the organizations who have come up empty-handed when looking for violence to justify these claims. Conservative websites trot out the same handful of anecdotes, like one case in Canada where a man pretended to be transgender and then assaulted two women, to justify their position, but a closer look reveals that these really are just a few isolated cases, some of which have later turned out to be totally made up, and none of which involved actual transgender people as perpetrators.

It's not like hordes of men sit around waiting for a excuse to throw on a dress and go creep on some kids. If a pervert really wants to be horrible in a bathroom, he (or she) is probably going to try it regardless of laws. And ordinances allowing for bathroom freedom don't suddenly make creepy bathroom behavior okay. If a man is in a bathroom taking pictures of little girls, or touching women inappropriately, that's still against the law, even if he claims he felt like a woman at the time. That man in Canada who pretended to be transgender to assault women? According to CBS, he was confined indefinitely to a security hospital as a mentally ill sex offender.

So about the whole "protecting children" thing... what about transgender children? For people whose primary concern really is safety, maybe they should take a look at what happens to transgender kids in bathrooms. According to Mic's Derrick Clifton, 70 percent of transgender individuals have been harassed, assaulted, or denied entrance when attempting to use public bathrooms. The fact that those claiming to be all about kid safety don't seem to care about the safety of transgender children shows that their fervor is really an excuse to justify discrimination.

When Attorney General Loretta Lynch announced on Monday that the Justice Department had filed a civil rights lawsuit against the North Carolina bill, she highlighted the discriminatory aspects of it, saying:

It was not so very long ago that states, including North Carolina, had other signs above restrooms, water fountains, and on public accommodations, keeping people out based on a distinction without a difference. We've moved beyond those dark days.

Hopefully soon, we will move beyond these dark days too.