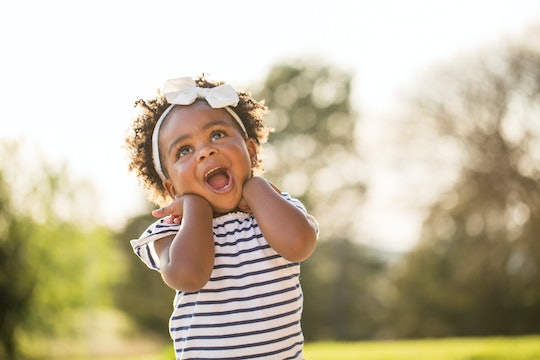 Hello, Here's Why Your Child Loves Constantly Shrieking At The TOP OF THEIR LUNGS

Most moms are familiar with the usual playground noise that comes along with bringing your kids to the park. In fact, you eventually become so used to it that you don't even notice the blood curdling screams coming from games of tag and who knows what else. But some days, it seems like the playground vibe is anything but peaceful and for some reason the kids are all just... shriekier? While, I doubt there's anything we can do to help silence the shrieks, if you're asking yourself why do children love to shriek so much, perhaps understanding why could help us deal with the high pitched noise, a little better — hopefully.

I was able to chat with some experts on the topic to help us moms better understand just what the heck is so fun about squealing to the point of nearly bursting vocal chords. Adina Mahalli, MSW is a certified mental health expert and family care professional at Maple Holistics, and along with early childhood education expert and National Director of Operations at Tiny Hoppers, Sherrie MacLean, gave their expert insights as to why kids just love to shriek.

Apparently kids shriek for a number of different reasons, but generally speaking, children tend to scream while playing. Mahalli says it's "a learned behavior and not an automatic reflex. They scream because they are having fun or they are pretending to be scared when really they are just running for the fun of it."

MacLean agrees and tells Romper, "Children most often shriek as a form of enjoyment and expression." She points out that babies often shriek or squeal when they're excited because they don't have the words to communicate their emotions. Toddlers also shriek as a way to express themselves or get attention, while older children are most likely to shriek out of enjoyment or when they're overcome with emotion.

"Children from a young age enjoy the sound and feeling of being loud," MacLean adds. "The vibration of the throat or the sounds they can make are fun to try. It's sometimes just fun to listen to the echo of their loud voice. They also enjoy when adults can join in the fun and see who can sing loudest. Shrieks are a swift attention grabber — people stop and look right away, which in some cases is what the child is looking for." However, some children may shriek because they are angry or frustrated. "As adults, it is our job to offer them solutions and allow the children time and space to calm down."

While the high pitched squeals might be less than music to our ears, it's good to know at least our kids are having fun and enjoying life — unless the shrieks are coming from the aisle at the grocery store, in which case, you have my sympathies. But it's possible to teach your child to lower their volume, explains Mahalli, if their shrieks are of the excited/happy variety.

If you're dealing with a child that has a developmental delay, you may find that "your child can’t communicate without screaming [because] they may be struggling to understand social cues and therefore scream instead of replying in a normal tone of voice," says Mahalli. If that's the case, there might not be much you can do to prevent meltdowns. But "giving [your child] your full attention before it becomes a problem and make it clear that you will not respond to their screams," may help. For the most part though, unexpected shrieks are developmentally appropriate for young children, so maybe it's time to invest in some swanky earphones for those long afternoons at the playground.

More Like This
Bindi Irwin Reveals Her Daughter Carries This Random Item Everywhere "Just In Case"
What Age Do Kids Start School? Here’s What You Need To Know
13-Month-Old Got Booked On Separate International Flight From Parents
"Crybaby Ambulance" In Europe Will Help Exhausted Parents