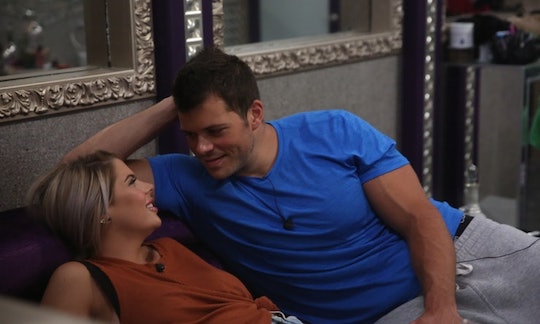 A 'Big Brother' Couple Were Spotted On 'Dancing With The Stars'

If you were paying attention to the audience on Monday night's episode of Dancing with the Stars, you may have noticed a couple of familiar faces you weren't expecting to see. I'm not talking about the "stars" who are participating, I'm talking about a certain couple of audience members. So why are Mark and Elena from Big Brother 19 on Dancing with the Stars? Apparently this showmance is a fan of ballroom dancing. Or being on TV. One or the other.

For the uninitiated, Big Brother is the show on CBS where a bunch of attractive young people hang out in a house, are filmed constantly, participate in games, and then eventually get evicted until one person wins the grand prize of $500,000. Sometimes, as a strategy, people couple up in order to form alliances. This way you always have someone in the house to count on being on your side. These, class, are called "showmances." Sometimes the showmances exist just for the show, and only last for the brief few months of being trapped in a house with the same people day after day for the span of three months. Other times, they result in actual relationships, which appears to be the case with Mark and Elena, who took their showmance on the road to the audience of Dancing with the Stars. Fans, of course, loved it.

So why were they there? I like to imagine that it was just date night. Perhaps the two were snuggling on the couch one night, and trying to decide what to do on Monday. Go to the movies? That same old pizza place they always go to? And then Mark comes up with the brilliant idea that they go to see a live taping of Dancing with the Stars because all of their other ideas were just so tired. Plus, this way they'd get to watch themselves on TV later in a decidedly not-embarrassing context. Disclaimer: I just made all of that up.

Davies, at least, is no stranger to the spotlight. Before she was on Big Brother Elena was a radio personality. On the Kid Kraddick Morning Show, Elena served as the show's resident dating app expert on "Tinder Tuesday." If she and Mark are really going steady these days as it seems they are, will she still be conducting research for this segment? My instinct says no, but I would like to reach out to her for some tips on sorting through these.

Neither of the reality stars have said anything about anyone on Dancing with the Stars on their Twitter or Instagram accounts, so they apparently are not active DWTS tweeters at least, though I can't say how deep their fandom for the show goes. It also doesn't look like they personally know any of the contestants, so I can't say who the couple would be rooting for. I'd like to say either Vanessa or Nick Lachey, because I feel that their aesthetics match.

My final theory for why these two showed up is that they're courting ABC because they want to be asked to be on the show the following season. Dancing with the Stars often includes at least one reality star, so why not a couple of them? It's possible that Mark and Elena are not famous enough to make the cut as one of the "stars," but I think that they'd make a highly entertaining addition to the show. Wouldn't you like to watch beefy personal trainer Mark learn to waltz? I know that I would. So team, now you know what you have to do — tweet incessantly at ABC to make this happen.