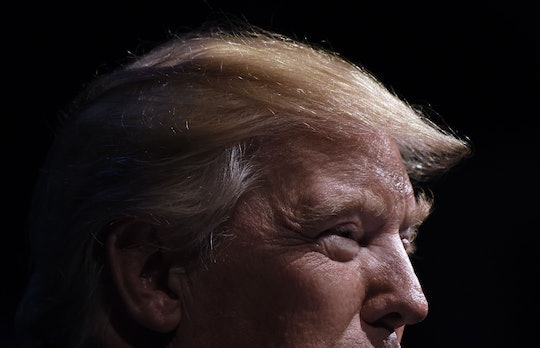 On Monday, the attorneys general for the state of Maryland and the District of Columbia filed suit against the president, in an unprecedented move of its kind. Why are Maryland and Washington, D.C. suing President Trump? Maryland Attorney General Brian E. Frosh and D.C. Attorney General Karl A. Racine allege Trump has committed "unprecedented constitutional violations," according to a copy of the lawsuit obtained by The Washington Post. Specifically, the attorneys general claim that the president has violated the emoluments clause of the U.S. Constitution. These are serious allegations against the president and his businesses, both domestic and foreign. Neither representatives for the president or the Trump Organization immediately responded to Romper's requests for comment.

At the heart of the lawsuit is the emoluments clause in the Constitution: So, what is it? Also called the Title of Nobility clause, it is the eighth clause that appears in Article I, Section 9 of the Constitution. Specifically:

No Title of Nobility shall be granted by the United States: And no Person holding any Office of Profit or Trust under them, shall, without the Consent of the Congress, accept of any present, Emolument, Office, or Title, of any kind whatever, from any King, Prince or foreign State.

In normal parlance, this basically says that U.S. presidents cannot accept gifts or favors from foreign governments, what with that whole "corruption" issue.

Trump refused to divest himself from his businesses when he took office, instead handing over operational control to his sons, Eric and Donald Jr. In January at Trump Tower in Manhattan, the president said in a press conference that, "They’re [his sons] not going to discuss it [the business] with me," adding, "They’re going to be running it in a very professional manner."

The Maryland and D.C. attorneys general allege that because Trump has never actually gave up ownership of his businesses by divesting, he is still benefiting monetarily from his businesses, both domestically and abroad. At the crux of this particular lawsuit includes Trump International Hotel in Washington D.C., which the attorneys general allege gains an unfair advantage over other D.C. hotels because of its unique ties to the president.

It's up to a federal judge to allow the case to proceed. If the lawsuit against President Trump does move forward, there's a very good chance the plaintiffs will request copies of Trump's complete tax returns as part of the discovery process, as they can provide details about exactly from where and whom payments to Trump were made, and whether he is still benefiting financially from his business ownership while president.

Neither President Trump, the White House, nor the Trump Organization has yet issued a response to the lawsuit, and mum's the word on Trump's Twitter account about the lawsuit for now — but who knows how long that blessed silence will last.