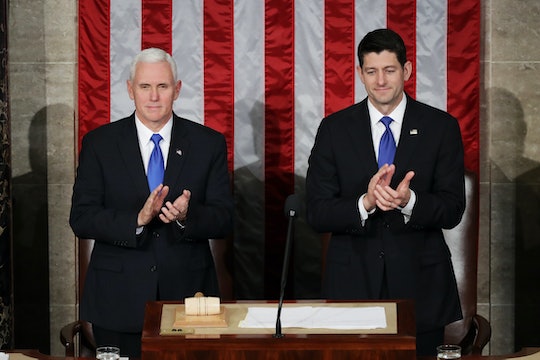 President Trump addressed both the House and the Senate on Feb. 28 for the first time since taking over the White House just over a month ago, but surprisingly, it wasn't his message that got people talking. It was the two dudes behind him. Right from the get-go, everyone wondered, well, the obvious: Why are Mike Pence and Paul Ryan wearing blue ties? Are they trying to match? Did they plan this? Have we all been propelled so far backwards into the depths of history that we're recreating all the times in high school where we subtly told our best friends to match us without like, you know, actually saying they planned to match with us?

Unsurprisingly, Trump used the night to discuss all of the things he's accomplished since assuming the presidency a short time ago. He smugly mouthed "thank yous" to those in attendance as they stood and clapped as he read off a scroll of all the things his administration has done to make America — you guessed it — greater than it was a mere 39 days ago. Despite the fact that the tone of the night was disappointing, it seemed (from the way the camera was angled) that Trump took the podium at an angle so as not to pay any mind to those in the pulpit wearing white during his Joint Address.

But back to the stars of the show, shall we? Twitter had a thrilling time fantasizing about what led Pence and Ryan to match on Tuesday evening, and of course, the stories did not disappoint:

And while the jokes are fantastic (and please, never stop), what's interesting is that Pence and Ryan opted out of wearing red. Red, as it's used in media, signifies the GOP party. But according to an article published on TheVerge.com, it wasn't always that way. Red for Republicans and blue for Democrats was used in 1976 during the Carter vs. Ford election, and it was based on the fact that Britain used red to signify the more "liberal party."

Then, as the publication pointed out, the election of 2000 marked the first time that The New York Times and USA Today published full-color election maps with red — the "r" used to signify "Republicans," according to The New York Times senior graphics editor Archie Tse — and blue coloring.

According to the website for Empowered by Color, the color blue signifies "trust, responsibility, honestly, and loyalty." It's "sincere, reserved, and quiet, and doesn't like to make a fuss or draw attention," three things that the Trump administration definitely does not like to do, amirite? As Juliet Zhu pointed out in the journal Science in February 2009, "Through associations with the sky, the ocean and water, most people associate blue with openness, peace and tranquility. The benign cues make people feel safe about being creative and exploratory. Not surprisingly it is people's favorite color."

It's not at all surprising that after such a tumultuous election and beginning of their tenure in the White House, Ryan and Pence might've wanted to send a subtle message of peace and willingness to work together to not only their constituents, but to the rest of America. And though we can all hope that's what these two men are after, tonight I'll let Twitter have its jokes.