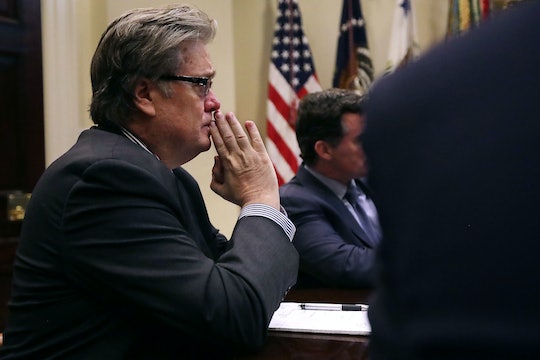 What Bannon & The NSA Have To Do With Each Other

On Saturday, President Trump reshuffled the National Security Council to include his chief strategist, Stephen Bannon, as a member, in one of three executive actions he took that day that sparked controversy. Bannon, the former executive chairman of Breitbart News, is now a permanent member of the “principals committee” of the NSC, while the director of national intelligence and chairman of the Joint Chiefs of Staff will only attend meetings if the “issues pertaining to their responsibilities and expertise are to be discussed.” The shake-up has elevated Bannon's position even further, and his new role — which is leaving people worried over how he might be able to impact the National Security Agency — has been much discussed in the media. So, why are people afraid of Bannon's NSA connections?

The National Security Council, which Bannon is now a member of, is not supposed to set policy. But according to a New York Times piece, it often does.

...the council is not supposed to set policy — it is not supposed to be “operational.” Of course, it frequently is. Get on the plane of the secretary of state or the secretary of defense, and you will almost always run into a council representative, who can keep an eye on things and call back to the White House. During the Iran nuclear negotiations, the council representative was a key player. It has gotten to the point where the council has its tentacles into everything.

And though the national security advisor and the NSC don't run the NSA, their influence is felt there. Since the director of national intelligence and the chairman of the Joint Chiefs of Staff have been demoted and won't be in attendance at regular NSC meetings, the influence of those remaining, such as Bannon, over national security affairs increases.

Former officials with experience in the way the NSC operates are concerned about the latest restructuring, so it's not just an issue that the media or opponents of Trump or Bannon are blowing out of proportion. James Steinberg, former deputy national security adviser in the Clinton administration, told The Guardian:

What is striking about it is it is such an explicit rejection of the well-entrenched principle that when it comes to matters of national security that politics doesn’t have any place in the room. It is a flat rejection of what has been a shared view of Republican and Democratic administrations.

There is a worry that someone like Bannon, who has said things like, "We think of ourselves as virulently anti-establishment, particularly ‘anti-’ the permanent political class" about Breitbart and his alt-right (white supremacist and Neo-Nazi) following, will politicize the concerns discussed in NSC meetings, and that influence could sway NSA matters.

While the NSC doesn't control the NSA, the personalities on the committee and the decisions made there can impact it. And while Bannon's appointment to the NSC doesn't have a direct influence on the NSA, his new role could still have a chilling affect there.