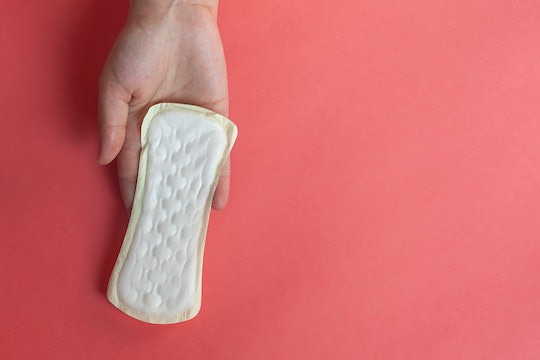 My first period post-childbirth arrived whilst I was enjoying brunch with a friend, and lounging upon a chair upholstered in bright white fabric. Because that is the kind of thing the universe likes to do when it's super bored. So yes, furniture was destroyed. A cardigan was hastily tied around my waist, and also destroyed. And I was left wondering why women's periods are so crazy heavy after birth?

Like most new mothers, I had completely forgotten about my period as I was currently consumed with other bodily matters, like keeping my battered nipples from looking like they had contracted the greyscale disease from Game of Thrones. Also, because I was still nursing, I thought I would be keeping the uterine gods at bay for awhile.

But come the menses did. And for the first time in my life, the term “Crimson Tide” seemed like the perfect descriptor of what was transpiring down below. (My apologies to all University of Alabama fans.)

What the hell is up with that first period? Why does it seem like Moses is standing at one's labia, ushering forth the Red Sea? Well, there is in fact a simple reason behind it. And it has so do with the size of ye olde baby maker. The uterus of course has grown a great deal during pregnancy, which means more endometrium (membrane) to shed, noted The Cleveland Clinic. Couple that big 'ol uterus with the crazy hormone fluctuations happening in the body, and it's a perfect storm. A scarlet blood storm. That is happening in one's pants. Delightful, right?

Now, before all those new moms out there panic and don four sets of Thinx before attempting Mother's Day mimosas, please note that not every woman's first post-baby period is a still from The Shining. It totally varies from woman to woman. Some ladies may have a totally normal or average Slougherhouse-Five. (Which is a slang term I think should happen, as it's both punny and literary, and there's nothing Kurt Vonnegut loved more than tampons. Or so I like to think.)

Also, a bit of good news: for some women who have previously suffered the misery of endometriosis, according to Today's Parent, they might actually discover that their period pain is greatly diminished, and in some cases, gone completely post-childbirth. Which is pretty awesome.

There are a few conditions, such as polyps or a thyroid disorder, that can also be the culprit behind super deluge periods, according to the ACOG. So if something seems truly off and concerning, it's of course always best to consult one's gyno, just to make sure everything is a-OK.

But generally, for those moms who find themselves out there laying waste to the booths of the Cheesecake Factory, well, it's just another one of the many wondrous, magical tidbits no one ever thinks to mention when discussing the joys of having a baby. Like how no one told me I would look like I had grown '80s-era bangs due to my hair breaking. Or that sneezing and flatulence would soon become a buddy team, functioning in bodily tandem. Usually when one is standing in an elevator with their hot neighbor.