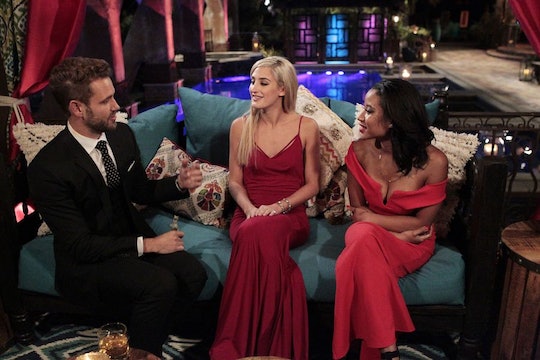 'The Bachelor' Premiere Was Full Of Red Dresses

Right off the bat on the Season 21 premiere of The Bachelor, there is a running theme among the women, and surprisingly, it’s their clothes. No, no one wore the same sparkling evening gown that looks like it came off a life-sized Barbie, but it’s basically just as weird. Several of the contestants were wearing red dresses, and there were so many of them that they noticed it themselves right away. But why were so many Bachelor contestants wearing a red dress? Obviously the goal was to grab Nick’s attention right away while being sexy and standing out in a statement color.

The only problem, though, is that a lot of them wanted to make the same statement and when Nick would think of the ladies later on in the night, there’s a good chance that many of those guilty red dress offenders would melt into one big jumble of curves, bronzer, and long silky hair. But maybe it goes deeper than just wanting to grab Nick's attention. Is it possible that red is Nick’s favorite color and that's why it was such a popular dress color choice? The Bachelor star has never really divulged what his favorite color is, because why would he? But clearly, some of the Season 21 contestants were thinking alike for the season premiere.

Of the 30 contestants starting out on The Bachelor, at least 10 or 11 of them wore red dresses to the opening cocktail hour before the first rose ceremony. Granted, some were on the brighter side while others were more burgundy, but still! It would have been a silly coincidence, but there were so many that the women jokingly called one of the sofas the “red dress couch,” or something like that. And, not surprisingly, some of them weren’t too crazy about not being set apart from some of the other women.

Another possibility, other than great reality TV minds thinking alike, is that some of the women knew that Nick went to the University of Wisconsin-Milwaukee and mistook it for the University of Wisconsin-Madison, where the school colors are white and red. Now, knowing about the Bachelor’s collegiate history might be pushing it on the stalker scale for some of these women, but Nick has also been a part of Bachelor Nation for a few years now, so at this point there is very little the world doesn't know about him.

There is also the “red dress effect,” which is as real as it is ridiculous. During a study at the Central China Normal University in Wuhan, China, scientists showed participants images of women in the colors red, white, and blue and the participants were asked to decide who they saw as the most appealing. The color red, when worn by a female, was said to attract the most attention from men, who mostly found the women in red to be “warmer and more competent.”

And according to ScienceMag.org, another study by psychologist Adam Pazda at the University of Rochester in New York concluded that men are more interested in women who are wearing red than white. In his study, Pazda gave 25 different men a photo of a woman in a white or red shirt and the majority of them were said to have graded women on a higher scale if they were wearing red, under the assumption that she would be more interested in sex.

Obviously dressing similarly to your competition isn’t ideal when you’re embarking on a several month-long show to find love with the same man. But hopefully Nick can see beyond the color of the dress these women chose for their first night with the new Bachelor and find the one that's right for him.