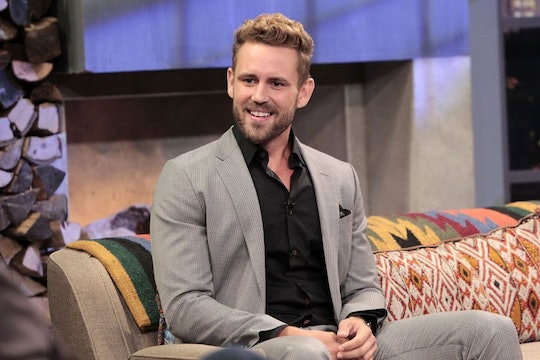 It's only September and anticipation for the newest season of The Bachelor is already killing us. The upcoming installment of the reality TV dating show marks the first time in five years that the chosen Bachelor isn't a runner up from the preceding Bachelorette season. In a big move by production, fan favorites from JoJo Fletcher's season of The Bachelorette were passed over in favor of naming Nick Viall the next Bachelor – and we're already getting hints about what to expect, thanks to recently-released photos of Nick Viall's Bachelor season.

When Nick Viall was announced as the newest leading man of the long-running reality series, fans were thrown for a serious loop for a number of reasons. For one, the announcement came prior to the season finale of Bachelor in Paradise Season 3.

For the latter half of that season, we watched Nick develop a relationship with Jen Saviano, and the announcement that Nick would be the next Bachelor effectively spoiled the Jen-Nick portion of the finale. The news was also shocking because many viewers (myself included) were all but convinced that Luke Pell from JoJo Fletcher's season would be the next Bachelor, continuing the long-running tradition of picking the starring suitor from the season immediately before.

But now that Nick's season has officially started filming, we're starting to get a little bit excited about the prospect of watching Nick find love on TV (again, but for real this time), as the star of his own season. Especially because, since he's doing the choosing this time around, he's all but guaranteed to find someone to wife up among the contestants (unless, of course, he pulls a Brad Womack).

Bachelor Nation producer/head honcho Mike Fleiss has been tweeting out a series of exclusive behind-the-scenes photos since the show began filming earlier this month, giving us a preview of what to expect in the new season.

It's a touch early to be throwing around engagement rings – they just filmed Night 1 last week! – so odds are Lane is just hanging around on set.

Unless the producers are pulling a fast one on all of us and Nick meets the love of his life on Night 1, proposes to her IMMEDIATELY, rides off into the sunset in the premiere's closing credits, and the season continues on with Luke Pell as the Bachelor?! (I know, I know, unlikely.)

The Women Are Rocking Gorgeous Formalwear, As Per Usual

Nick is pictured with a veil-wearing mystery lady, strolling by a pool, in what seems to be a one-on-one date segment. That was fast!

While we don't have an exact date for the premiere quite yet, the show is expected to return in January 2017, according to ABC's press release.