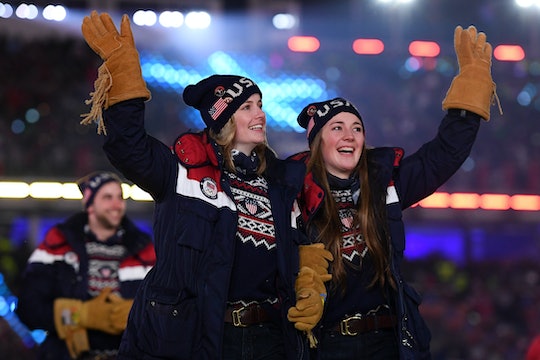 Why Are The Countries Out Of Order At The Closing Ceremony? Here's The Reason For The Change

It's always exciting to watch as the world's best athletes unite to compete in the Olympic Games, but now that the events have finished and the medals have been won, it's time to wrap things up and celebrate. For those unable to watch the early-morning livestream of the 2018 PyeongChang Winter Games closing ceremony, it will also broadcast later in the day on NBC at 8 p.m. Eastern Time, according to TIME. But unlike at the opening ceremony, we won't actually get to know in advance when Team USA will appear. Why are the countries out of order at the closing ceremony? It all comes down to official Olympic protocol.

A major part of the opening ceremony of any Olympic Games is the Parade of Nations, where each national team is formally introduced before walking behind their designated flag bearer. Participating in the Parade of Nations is an exciting honor, but there are rules for how it's actually done. For one, the countries typically march "in alphabetical order according to the language of the host country," according to the International Olympic Committee, with the exception of Greece — which as the original Olympic host city, always leads — and that year's host country, which always appears last.

During the closing ceremony however, things are done a little differently. Instead of the Parade of Nations, the first element of the closing ceremony following the playing of the host country's national anthem is the Parade of Flags, according to the International Olympic Committee. The flag parade works in a similar way to the opening ceremony parade — that is, the Greek flag is carried out first by a chosen member of the Greek national team, the host country's flag is carried out last, and all the other flags appear in alphabetical order. The athletes themselves then appear immediately following the flag parade, but this time, they aren't actually separated by country. During the closing ceremony, all the athletes enter the stadium together, in no particular order whatsoever.

Although that might not be the easiest way for Olympic viewers to specifically catch a glimpse of their favorite athletes, it is a pretty important symbolic gesture. After all, although the competition between countries during the games themselves might be fierce, the closing ceremony is a time for everyone to come together and celebrate everything they've worked so hard to achieve over the past two weeks.

What's interesting though is that, actually, the closing ceremony protocol didn't always work that way. Originally, athletes in the closing ceremony walked in order according to country, just like in the opening ceremony, but that all changed during the 1956 Melbourne Olympic Games, when 17-year-old Australian John Ian Wing wrote to organizers of the games and suggested athletes walk as one big group. According to the National Museum of Australia, Wing argued that doing so would represent athletes' "common humanity and unity in sport," and well, Olympic organizers liked the idea so much that it's been the tradition ever since.

On Friday, the United States Olympic Committee announced that cross-country skier (and PyeongChang gold medalist) Jessie Diggins would be carrying the flag on behalf of Team USA at the closing ceremony, meaning she will be front and center during the flag parade. As for the rest of the American athletes though? Your best shot at spotting them in the crowd will be to keep an eye out for their outfits. According to E! News, the Ralph Lauren-designed closing ceremony uniforms will include a white water-repellent jacket over a red, white, and blue sweater, worn with double-fleece blue plants. Unlike the opening ceremony uniform, the brown suede gloves will be swapped out for a more basic set of knitted mittens, but the Team USA hat and red-laced boots will stay the same.

Honestly, the closing ceremony at any Olympic Games is kind of bittersweet. Even though it's fun to watch the athletes celebrate their accomplishments, and to see the host country hand the proverbial baton to the next country set to host in four years' time, it's also a shame to see it all come to an end. But unlike the opening ceremony, which was full of excited anticipation, the closing ceremony is just a really good time — as well as a reminder that, no matter where an athlete may have landed on the podium or in the rankings, they definitely did their country (and the world) proud.

More Like This
Firefly Lane Is Coming Back To Netflix For One More Final Season
10 Horror Movies With Creepy Kids That Will Scare The $#*% Out Of You
Exclusive: Your Favorite Yeti Is Back With More Adventures In New 'Abominable' Series
The Complicated Targaryen Family Tree From House of the Dragon Explained