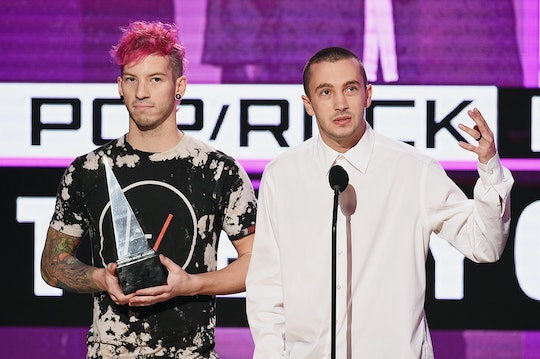 Why Are Twenty One Pilots Wearing Masks At The AMAs? It Was A Unique Statement

I blame Sia; nobody wants to show their faces anymore. At the American Music Awards on Sunday night, Twenty One Pilots were early winners. They were sweet and adorable receiving their awards and everyone went, "Aawwww, I love them!" That was until their first performance. Twenty One Pilots wore masks while performing at the AMAs, and the internet is confused.

The duo Twenty One Pilots, Tyler Joseph and Joshua Dun, won Favorite Band, Duo or Group early on. They went on to perform a killer mashup of their popular songs "Stressed Out" and "Heathens" (from the Suicide Squad soundtrack), but they did it wearing full black ski masks. Why, you ask? According to Tyler Joseph on APTV:

[We’re] trying to create something that’s a bit more faceless, that can represent a group of people or have people relate to it.

Twenty One Pilots have a flare for the dramatic, often performing in red suits and full black masks to fully connect with their audience. The multi-talented Joseph plays bass, piano, and the ukulele, and finds the mask helps him escape the pressure to be a certain type of artist to a certain type of audience. As he told Rolling Stone magazine:

There was a lot of pressure to find a genre and stick to it. People would tell me all the time, 'You can't be all things to everyone.' I would say, 'I'm not trying to be! I'm being what I want to be for myself.'

Twenty One Pilots, who went on to win Favorite Alternative Rock Artist, are trying hard to be unique and authentic. The name of their band comes from the Arthur Miller play, All My Sons; a character in the play makes the catastrophic decision to knowingly allow faulty planes to take off to avoid losing money, and 21 pilots die as a result of that decision. Joseph was offered a basketball scholarship to Otterbein University, but chose instead to go after his dream.

"I could relate to the fact that making the right decision in life sometimes takes more work," says Joseph. "It takes more time, and it can feel like you're going backward."

Their fans are glad Joseph decided to follow the road less travelled. And especially glad that the duo refuse to be pigeon-holed into one specific genre of music. As Joseph told Rolling Stone:

It is true that if you hear our music described, it sounds unappealing. I used to laugh and agree with people when they said it didn't make any sense. I'm going to stop saying that. It fits together into one body of work, because we made it.