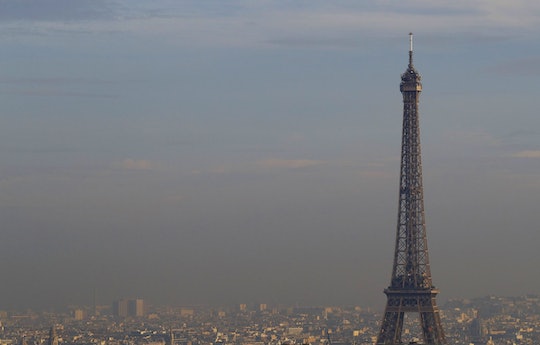 Why Are We So Obsessed With French Moms?

If you picture a French mom, you probably imagine a woman who looks like a young Catherine Deneuve pushing her sleeping baby in a stroller down a narrow, cobblestone street. She's wearing bright red lipstick, a tight black dress, big sunglasses, and, of course, five-inch heels—despite the cobblestone. She nibbles a chocolate croissant and gazes in shop windows as her child sleeps soundly, the Eiffel Tower glistening in the distance.

This image of a picture-perfect Gallic mom is supported by popular culture, including books like Mireile Guilano's French Women Don't Get Fat and Pamela Druckerman's French parenting manual Bringing Up Bébé. According to these best-sellers, French moms are calm, composed, and almost always a size 2, while their children are polite, good sleepers, and never, ever picky eaters.

In short, we’re obsessed with French moms because they appear to do everything better than us, and all with exceptional amounts of style. When it comes to just about anything French, the average American associates an innate sense of sophistication with the country's food, clothing, and language. But does the country that produces the world’s best cheese and wine also produce the world's best parents? Or is our obsession with French moms as insubstantial as the last spritz of your Chanel No. 5?

To hear pop culture tell it, the difference between France and the United States when it comes to parenting boils down to one key difference: French parents are calm and collected, while American parents are frazzled, hyper-organized and constantly driven by chaos. According to the media, French mothers yell much less than American ones, trust their instincts, and suffer from far less guilt. Their children eat fish and vegetables, learn to self-soothe as babies, and don't put their elbows on the table.

"If I was only given only three words with which to advise American parents based on what I'd learned writing the book, they would be 'be more strict,'" Catherine Crawford, author of French Twist: An American Mom's Experiment in Parisian Parenting, told Romper. Published in 2013, Crawford's book tracks her attempts to use French-inspired parenting to raise her two daughters in Brooklyn.

The French parenting style encourages children to behave (i.e: use "please" and "thank you," act in a disciplined manner, learn to self-occupy their time, and avoid interrupting parents and adults who are conversing), Kerry Halferty Hardy, a Paris-based mother of two, told Romper. "As a whole, it perhaps could be said that parents see their role as directing and teaching their children to act responsibly and appropriately in society," she says.

"Adult time is adult time. Mothers can also be women, not sacrificing femininity and self-care in the pursuit of perfect motherhood."

Perhaps most importantly, research seems to suggest that French moms actually enjoy parenting more than American moms. In a recent paper published by a sociology professor at the University of Texas in Austin, Americans (including parents and non-parents) on average ranked their happiness levels significantly higher than the French, but a 2009 study from economists at Princeton found American parents are twice as unhappy as the French when dealing with their children.

Some of this gap can be attributed to French moms achieving a better balance between parenting and adult life. "While French parents love their children and do what they think is important for their future success and happiness, they are not slaves to their children," Hardy told Romper. "Adult time is adult time. Mothers can also be women, not sacrificing femininity and self-care in the pursuit of perfect motherhood."

For Crawford, one major difference between French and American parents comes down to respecting children's developmental stages. The French, she noted, are more age-appropriate when it comes to disciplining their kids. "Parenting [in the U.S.] can be a little backwards, where parents negotiate for hours with a two-year old, and yet when their kids are twelve, they are hovered over like toddlers," she says.

Former New York Times journalist Pamela Druckerman made a big splash in parenting media when she published her Bringing Up Bebe in 2012. She spent several years studying the difference in parenting styles between the two cultures. And when she moved to Paris, the first difference that struck her was in food. While most restaurants in the United States offer mac 'n' cheese or chicken strips for kids, French restaurants expect kids to have more mature palates. "There is no category of food called kids' food," Druckerman says in an interview with NPR. "Kids and adults, from the start, eat the same thing."

Laura June summed up our obsession with the French and French parenting in response to Druckerman's book for NY Mag’s the Cut. In her piece, June argued that while Druckerman's book might make French parenting seem more appealing on the surface, it glossed over a number of crucial differences between French and American culture, such as the fact that mothers in France have much more maternity leave than their American counterparts:

I agreed with everything I read. It seemed sensible, more laid-back and yet more structured about things like eating and sleeping that particularly seem to drag my American parent friends apart... [But] because Druckerman was living in France, she had access to the French government’s incredible services for families. In France, mothers get 16 full weeks of paid leave (26 for your third child), and the government pays an allowance to parents for each child.

The United States is one of the few developed countries in the world that does not offer paid maternity leave. In the United States, 33% of women do not receive pay during their maternity leave, and less than 56% of employees who work for a private company are eligible for leave at all. (Dads are left high and dry, too. While in France, they receive at least 11 days — and up to six months — of leave, it is rare for American men to receive paid paternity leave.)

"Perhaps they're a bit worn out with the competition of perfect parenting."

In the United States, when it's time for working moms to return to the office, the cost of childcare can quickly drain their savings accounts. Most can expect to spend more than 10 percent of their household income on childcare alone. And the average cost for one week of care? Nearly $800 per month, just for one child.

Meanwhile, June writes, France has a national childcare program (albeit with a very long wait list):

[It's] staffed with trained child-care workers who are paid better than their American counterparts. It provides full meals for children (most American day cares do not, adding to the time burden at home), and it’s funded at a rate of about 80 percent by the state. Some parents pay nothing. Nothing at all.

By placing such a high priority on child care from the start, French parents have something we should all envy. Unlike American parents, who arguably strive to make up for lost time with their newborns by doling out too much praise and behaving like "helicopter parents" later on in life, mandating family leave gives new parents time to devote to their newborns and shape their children's behavior from the very beginning.

The Real Root of Our Obsession?

It's true that there are day-to-day cultural differences between French and American moms, and if American mothers want to try to encourage solo play, self-soothing methods, or less picky eating habits, more power to them. But the real root of our obsession lies in our admiration —or even envy — of other, arguably more "sophisticated" cultures.

American moms are fascinated by a vision of chic French women with impeccably dressed and well-behaved children, Hardy tells Romper. French moms would never be caught dead in yoga pants, wearing a hair clip, and carrying a to-go mug of Starbucks. That, she tells Romper, creates a countervailing pressure to be slim, attractive, and "the perfect woman" shortly after giving birth, which is exhausting. "Perhaps [American mothers] are a bit worn out with the competition of perfect parenting and how many awards, activities, firsts, and bests they're seeking for their children and feeling frustrated with an imbalance in the parenting role versus the spousal and personal roles," she said.

More Like This
25 Mother And Daughter Halloween Costume Ideas That Are Cute And Spooky
I Finally Tried Toy Rotation — & OMG, It Actually Works
Tips For Apple Picking With Kids
Now Your Kid Can Rock AFO Braces With Their Favorite Doll Or Stuffie