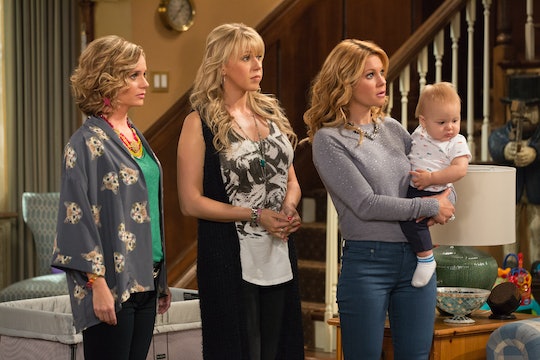 Why Can't Stephanie Have Kids On 'Fuller House'? Here Are 4 Possible Reasons

Growing up, Full House kept its Aesop's fables-esque "lessons at the end of the episode" pretty straightforward. The issues didn't exactly rock the boat and were staples of "after school special" teachable moments facing kids and teens in the '90s: smoking, drinking, body image. But, now that the Tanner girls have all grown up in Fuller House, so have their issues. And the bombshell that surprised many watching the Netflix original series when it premiered Friday was finding out that Stephanie has infertility. Why can't Stephanie have kids?

In episode five of Fuller House, Stephanie is torn between her single-and-loving D.J. (as in disc jockey) lifestyle and helping care for her three nephews with big sis, D.J. (as in Donna Jo). While spinning tracks at Coachella — because, of course Fuller House invoked Coachella — Stephanie helps boost her nephew's self-esteem enough to get him to play his trumpet recital. After all the wackiness of the episode, Fuller House suddenly gets real: When D.J. teases her sister about "getting sucked into the vortex of motherhood!" — Stephanie shocks her with the news that she can't have children. Despite the devastating reveal, it's not entirely clear why Stephanie can't have kids.

While Fuller House got infertility right, the writers didn't exactly dive deep into Stephanie's diagnosis. After D.J. scoops her up in a hug asking if she's okay, Stephanie replies simply, "I can't have children. I'm okay... I just found out a while ago it's not going to happen for me." On the one hand, it's a great way to introduce a plot point that could develop in Fuller House season two. But, without getting into more detail, we're left to speculate what Stephanie's infertility diagnosis might be.

Polycystic ovarian syndrome is a complex endocrine disorder that affects as many as 5 to 10 percent of women ages 18 to 44 years old; PCOS is one of the most common endocrine disorders in women in this age group. Common signs and symptoms of PCOS include obesity, irregular periods, insulin resistance, acne, and hirsutism. It's not entirely out of the realm of possibility that Stephanie could be dealing with such a common disorder that affects a woman's ability to get pregnant. That said, it is possible to get pregnant with PCOS — both naturally or with fertility treatments — so, not exactly aligning too much with her claim that "it's just not going to happen" for her.

Endometriosis is a disease where uterine tissue — endometrium, aka your monthly period gunk — grows outside of the uterus. Endometriosis affects an estimated 176 million women worldwide and is one of the leading causes of both chronic pelvic pain and infertility in women. Treatment options vary — from non-invasive combined oral contraceptives to complete removal of the uterus, and, even then, none of them are guarantees, as endometriosis has no cure. I'm sure if Stephanie had a complete hysterectomy she would have said something more than "I'm okay" to her sister. Again, even with endometriosis, it's still possible for Stephanie to have children, but she might need a lot more help. And, she's in famous company, as Lena Dunham recently revealed her battle with endometriosis on Instagram.

Given the gravity and sense of finality with which Stephanie explained her infertility, primary ovarian insufficiency — also known as premature ovarian failure or premature menopause — could be a very likely candidate for the reason why Stephanie can't have kids. While not considered a rare disease, POI only affects 1 percent of the female population, and, of that 1 percent, only 5 to 10 percent of women with a POI diagnosis will ever conceive on their own. For most women with POI, their only two options to have children is to pursue IVF with donor eggs or adoption. POI definitely fits the "not going to happen for me" explanation — and can be diagnosed without having to be actively trying to conceive.

A fourth possibility as vague and devastating for Stephanie's revelation could be unexplained infertility, affecting as many as 20 percent of couples trying to conceive in the United States. For some women, there's just no reason why they can't conceive, despite numerous attempts or tests. Equally as unknown is whether or not they'll ever be able to conceive naturally or with assistance. However, the most usual way that women come to an unexplained infertility diagnosis is when they try to get pregnant without success. Fuller House has made it clear that Stephanie is very unattached, so it would seem unlikely that she was trying to conceive before her diagnosis — but who knows.

No matter what the reason behind Stephanie's inability to have kids, I applaud Fuller House for bringing such a compassionate, realistic portrayal of infertility to the small screen. Here's hoping they take that same compassionate route with Stephanie's character development in Season 2.