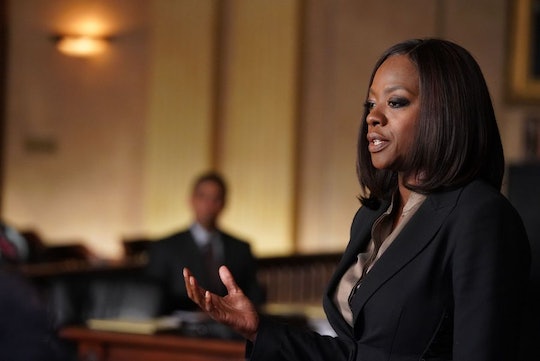 Although the newest season of How to Get Away With Murder is here, fans can't help reliving the past season. Specifically, many can't stop thinking about Wes and his connection to Annalise. In the Season 3 finale, Annalise attended a much needed Alcoholics Anonymous meeting, in which she said Wes was her son. So why did Annalise call Wes her son on HTGAWM? Well, some believe it's because Wes was actually Annalise's biological son.

In the past season, viewers were given a much more detailed look into Wes and Annalise's past and how they connected. Through flashbacks it was revealed that Annalise was the lawyer for a family called the Mahoneys, who Wes' mother, Rose, worked for. Charles Mahoney was on trial for killing his fiancée, Vickie, and it was Annalise's job to make sure Rose provided the correct witness account that would give Charles a credible alibi on the night Vickie was killed.

However, Rose later revealed to Annalise that she didn't actually see Charles that night and feared for her and her son's lives. In order to protect her son, Rose killed herself in front of Annalise by stabbing herself in the neck. Annalise then left and watched as Wes discovered his mother's dead body. She then made sure Wes wasn't charged with murdering his mother behind the scenes.

During this time, Annalise was pregnant. However, after she failed to get Rose to testify, the Mahoneys got their revenge by having a truck smash into Annalise's car, leading to the death of her unborn child. After that, Annalise never had kids. Additionally, last season it was revealed that Charles was actually Wes' father.

With all this information, it seems hard to believe Annalise is somehow actually Annalise's son, and many are actually taking what Annalise said out of context. During the AA meeting what she really said was Wes "felt like my son... he was my son, and he's gone." Thus, what she really seemed to mean was Wes was like a son to her, and not that they were actually biologically related.

Still there is room for questions. For one, Rose claimed she and her son immigrated to Haiti, but that obviously can't be true since Wes' father is Charles. While it makes sense that Rose would lie about that, because she didn't want the Mahoneys to try and take Wes from her, it still changes Wes' history. Even so, that doesn't really explain how Wes could be Annalise's son. Rose was very concerned about the Mahoneys trying to hurt her son. If Wes was adopted, why would she think she had to keep Wes' parentage a secret? It doesn't add up.

Moreover, if Annalise did have a child when she was younger, how has it not come up yet, especially with how often Annalise has now gone back home. Her mother currently has dementia, so now would be the perfect time for the show to drop some hints that Annalise had a secret love child because perhaps her mother would think about that now. Except that hasn't happened. Sure, it's possible this was a secret Annalise kept from even her family but I find it hard to believe Annalise could've successfully hidden a secret from her mother, who likes to show up unannounced, for nine whole months.

It definitely seems like Annalise simply felt a responsibility to Wes, especially because Rose and her unborn child died around the same time and because of the same people. Annalise calling Wes her son was completely figurative, and only demonstrated how much losing Wes really hurt Annalise. Of all the Keating Five, Wes was obviously the one Annalise was closest to, and it's clear that she feels responsible for his death, even though it wasn't directly her fault.

Although I still can't forgive the show writers for killing off Wes, it is a good jumping off point for a redemption arc for Annalise. And it looks like that's exactly what will happen this season.