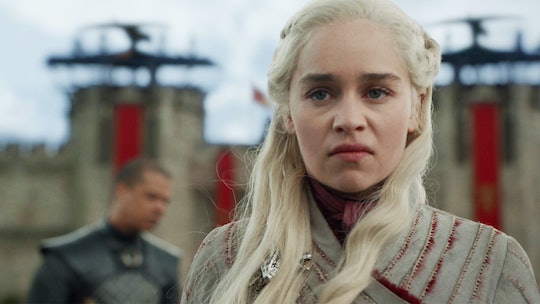 It's official. We're one episode away from the Game of Thrones series finale and now, Daenerys Targaryen can add two more titles to her extraordinarily long list of names — Queen of the Ashes and Mad Queen. In the fifth episode of the final season titled "The Bells," Daenerys burned King's Landing in a flurry of bloodshed and destruction. However, after years of development and growth, the latest installment to Daenerys' character arc feels like yet another strong female character being sabotaged by showrunners David Benioff and DB Weiss.

Fans have been praising Lord Varys for trying to warn the realm about Daenerys, but they should have paid more attention towards the comments made by Ava DuVernay, Jessica Chastain, and Melissa Silverstein following the May 5 episode of the HBO series. On Twitter, the celebrities called out Game of Thrones' problematic treatment of women. DuVernay explained that the series beheaded its "one and only sister" throughout the entire show. Meanwhile, Chastain had to spell out that rape shouldn't be a "tool to make a character stronger." Silverstein then offered an explanation — Game of Thrones lacks in female representation behind the camera.

And Daenerys' choice in "The Bells" made that abundantly clear.

Ultimately, the Mother of Dragons is a complex character, but that wasn't shown in Episode 5 and the treatment of Daenerys' character felt abrupt, confusing, and undeserved.

The conflict between Daenerys' empathy and desire for power have always been sprinkled throughout Game of Thrones. Sure, she is ruthless and at the end of the day, she wants to sit on that Iron Throne. But she is also the Breaker of Chains for a reason. She liberated The Unsullied and freed slaves in Astapor, Yunkai, and Meereen. She won the loyalty of hundreds of soldiers. She saved women from being raped by Dothraki warriors. She wanted to create a better world for those living in it.

Nonetheless, in "The Bells," there was no internal conflict and no real explanation for Daenerys' sudden actions. After the King's Landing soldiers threw down their weapons and the bells began to ring, signifying surrender, Daenerys chose to destroy the city and dispose of thousands of innocent lives. Fans — including myself — are still questioning why she did it.

On "Inside the Episode," Benioff and Weiss shared why Daenerys decided to burn King's Landing to a crisp.

"I don't think she decided ahead of time that she was going to do what she did," Weiss said. "She sees the Red Keep, which is the home that her family built when they first came over to this country 300 years ago. It's in that moment on the walls of King's Landing, when she's looking at that symbol of everything that was taken from her, when she makes the decision to make this personal."

Wait. So the showrunners are trying to tell me that they had Daenerys make a snap decision to murder thousands of innocent people... because she made it "personal"? Do they realize that by saying this, they're also admitting that there is, in fact, no reason why Daenerys let go of her goals except... her emotions got in the way? There is no grander reason. No overarching theme. No misunderstanding. In the final season, Daenerys of the House Targaryen, the First of Her Name, The Unburnt, Queen of the Andals, the Rhoynar and the First Men, Queen of Meereen, Khaleesi of the Great Grass Sea, Protector of the Realm, Lady Regent of the Seven Kingdoms, Breaker of Chains and Mother of Dragons, was reduced to a mad woman on a dragon.

And I'm (not) sorry, but seriously? I didn't spend eight years watching Daenerys' storyline for this one-dimensional cop-out.

Sure, it's possible that Benioff and Weiss determined Daenerys' Mad Queen fate early on. Perhaps she was always meant to burn King's Landing to the ground. However, the way the story was handled and shown onscreen make it blatantly obvious that more women needed to be that writers' room.