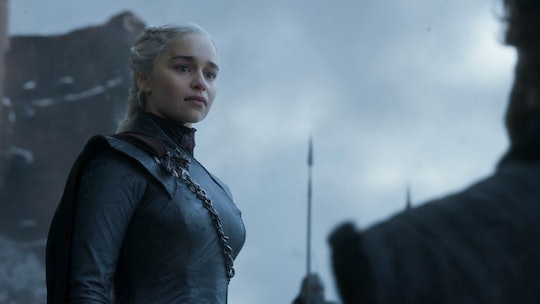 Actually, Daenerys' End On 'Game Of Thrones' Was Hinted At Throughout The Series

Daenerys had arguably one of the most tragic story arcs on Game of Thrones. She might not have had it as difficult as Jon growing up or dealt with constant rejection like Tyrion, but she never had it easy. She fought for everything she had and paid with her unborn child's life, her husband's life, and that of two of her dragon "children." With all that she had been through, a lot of fans can't help but wonder why Daenerys’ story ended that way on Game of Thrones.

To be honest, a lot of the foreshadowing was staring us all in the face from the beginning, even when Daenerys was freeing slaves and saving poorly treated soldiers. She wasn't always "evil" and I'm not sure if she died in Jon's arms as evil incarnate but she grew up believing that she was entitled to something and that she had the right to take it by any means necessary.

That was where the biggest problem with Daenerys was. Her entire life was propelled forward by this idea that she was the Dragon Queen and that taking the iron throne was her birthright. Because of that, she felt that any casualties along the way or people who got in the way were all party of her destiny. And if you look back at Daenerys’ journey, you'll see that this was in the cards for her all along.

The biggest issue fans have with the way Daenerys' story arc ended is that they feel like it came out of nowhere. And without looking too deep into her past, I can see why some Game of Thrones fans might feel that way. She spent years as a dedicated ruler, seemingly trying her best to do what was right, only to be cut down in the final season in a few episodes. But it's easy to see Daenerys' story that way when you don't consider everywhere she has been.

Daenerys was already burning people alive who didn't agree with her long before the last couple of seasons. Only at the time, those deaths may have seemed more warranted. Some fans might also feel like they had been with Daenerys on her journey so long that suddenly rooting for her death seemed like a betrayal. But if you look at Daenerys' journey from the start of the series to the point where things started to shift, it isn't entirely surprising.

Other Game of Thrones fans claimed that Season 8 changed the show's female characters, Daenerys included, and not for the better. The problem is that Daenerys spent years and put in so much work to get to where she was in the final season as a strong female ruler. She had the potential to be the leader that Westeros needed, but in the blink of an eye, she killed thousands. However awful her actions were, however, they weren't totally out of left field in the grand scheme of things.

Back in Season 1, Daenerys got her first taste of blood when she watched her brother Viserys die in front of her. He had threatened to cut her unborn son out of her if Drogo didn't yet deliver on his promise to help Viserys become a king. Instead of giving in to Viserys, however, Drogo emptied a pot of molten gold on Viserys’ head to give him a "golden crown" and kill him.

Daenerys watched on with zero emotion and learned firsthand that you can use force to get rid of your enemies rather than diplomacy to get them to bend the knee. Viserys was, by all accounts, terrible to her, but it was still chilling the way Daenerys watched him die. It might have been the first clue that Daenerys wasn't guaranteed to be the most gentle ruler.

Before Daenerys took over Meereen, she traded her dragons for the Unsullied soldiers. She reasoned that she would be a fair ruler to them and give them purpose, but it's important to note who these men were. They were raised to be callous, unfeeling, and emotionless soldiers. What does that say about Daenerys that she chose to take them in? It seems more like she was willing to overlook soldiers whose initiation included killing an infant in order to gain a large army for herself.

Speaking of Daenerys’ dragon trade, the whole thing was as shady as it could get. She traded her untamed dragons for the army, knowing full well that the dragons would never obey anyone but her. So when they set fire to the Unsullied masters, it was clear that this was Daenerys’ plan all along. Yes, the masters were bad men, but this incident showed Daenerys’ clear lack of honor early on.

After Daenerys made her way to Meereen, she put plans into motion to lay siege to the city and abolish slavery right away. It was a noble cause, but it came with the price of killing more than 150 slave masters when Daenerys could have shown mercy to her new subjects. When Sir Barristan Selmy advised Daenerys that "Sometimes it is best to answer injustice with mercy," she responded, "I will answer injustice with justice." Maybe she believed that she was doing right by the slaves in murdering their former masters. It was still a moment early on where she showed no mercy when she could have.

When Daenerys was finally ready to begin her voyage to Westeros, her first order of business was striking a deal with Yara and the Iron Islands. In exchange for pledging to Daenerys, she would help Yara gain back her house from Euron, who had returned to claim the power for himself. Yara agreed to bend the knee and it was the first time viewers saw Daenerys use bending the knee as a way to manipulate people into following her or she would deny support.

Daenerys got her first taste of Westeros soldiers at the loot train battle in Season 7 Episode 4 "The Spoils of War." She defeated the Lannister and Tarly armies and later gave them the chance to bend the knee or face death. When Randall and Dickon, Samwell's father and brother respectively, refused to bend to her, she used dragon fire to execute them. It was a quick death with little room for negotiation or even a makeshift trial. And as much as Game of Thrones viewers had seen up until that point, it was still shocking.

From there, she continued to show more signs of doing things her way rather than take the advice of her counsel. When Tyrion worked as Daenerys’ hand at Dragonstone, her patience with him grew thinner and thinner. At one point in Season 7, she told him that she was done with his "clever plans." Tyrion has always had a way with words and although he made sense most of the time with Daenerys, it wasn't always what she wanted to hear.

Her impatience with him started chipping away at their relationship and it showed that if Daenerys couldn't take the advice of her Hand, whose job is literally to tell the queen what is best, then she might go rogue.

At the celebratory dinner after the North defeated the Night King, Daenerys watched Jon get praised by his friends for riding a dragon into battle. But Daenerys sat alone at the head table and it was obvious that the truth had clicked into place for her. She felt isolated in a place where she had been told her whole life she was meant to go in order to free people from a tyrannical ruler. That feeling of isolation, along with everything else Daenerys had been through, was enough to drive her to her ruthless acts in King's Landing.

In the span of what was probably just a couple of weeks, Daenerys lost Jorah, who was her closest confidant, Missandei, who was her best friend, and then Jon as her lover. After Jon found out his true parentage, Jon couldn't bring himself to love her the way she wanted. She still felt like they could be together and I don't really blame her since Targaryens had been marrying each other for generations. When she told him, "Let it be fear," it was the biggest warning fans could have been given of what was to come.

The bells at King's Landing were the final straw. Daenerys didn't "go mad" and she wasn't inherently evil, but the bells reminded her of so much that had led her to this point in the battle for the throne. She lashed out to take over with fear above all else because she saw that she was never going to get trust or loyalty in Westeros the way Jon and other leaders had.

Afterward, Daenerys saw that her means of taking power and control through fire and blood worked. Her armies rallied behind her encouragingly and she saw that this was the only way she could lead Westeros and, eventually, the world. If the people weren't going to follow her because of her birthright and her name, she would force them to with fear.

This isn't because the Game of Thrones writers suddenly needed a way to end her story. It was because after a lifetime of being told this was her destiny, taking the throne was all Daenerys had left. If she didn't continue her quest to get it, then her entire life's work would have been for nothing. Jon saw that there would be nothing but more death and destruction along the way, however, and he had no choice but to kill Daenerys and put an end to what was already a ruthless reign.