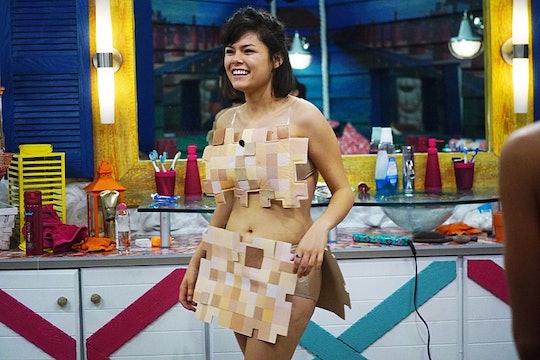 Why Did Frank Nominate Bridgette On 'Big Brother 18'? He Had To Pick A Replacement

Things were so much more simple just a few episodes ago on Big Brother, when Frank won the first Roadkill competition and was able to put Paul up on the chopping block. Then, everything changed in the Power of Veto comp Wednesday night and Frank had to put up someone else. So why did Frank nominate Bridgette on Big Brother? It's not like he had many other choices, but Bridgette may have been the safest bet to be put up for eviction alongside Paulie and Jozea. Then again, wasn't Paulie supposed to be the "safe" pick for eviction?

Paulie himself readily assured Bridgette that she'd be safe from eviction, come Thursday, and we aren't going to deny that. Aside from some Paulie flirtations, Bridgette has been pretty much under the radar. She even opted out of Jozea's weird house meeting that he used as an excuse to seem like some sort of house leader again. But let's think about the other possible choices for Frank to put up for eviction. Aside from Bridgette, there was Da'Vonne, Michelle, and Zakiyah, who all happen to be in the Eight Pack alliance with him. Through no fault of her own, Bridgette just pulled the short straw in this one. Sure, she's on Frank's team, but alliances seem to be of much more importance to the houseguests this season on Big Brother.

Frank nominated Bridgette on Big Brother because of two important reasons. First, she was the only possibility that isn't in his largest alliance. And secondly, as Frank said in the Diary Room toward the end of Wednesday's episode, Bridgette should be fine. The hope of some of the houseguests is for Jozea to take the fall for the three currently up for eviction and let the house be rid of their "messiah". But we all know that Jozea will not go without a fight, and for all of his trash talking and faux leading of his fellow Big Brother houseguests, he brings the drama we all grudgingly love.

Bridgette may have the support of her team and her fellow Spy Girls, and despite all of Jozea's delusions of grandeur, he still has claim to a couple of alliances, while Paulie isn't exactly alone. But he does spend most of his time either flirting with Bridgette or working out, and there's something to be said for being super social in the Big Brother house. Basically, Frank's decision in nominating Bridgette for eviction was because he figured she'd be safe, but it's going to be anyone's game for the first official eviction of Big Brother 18.