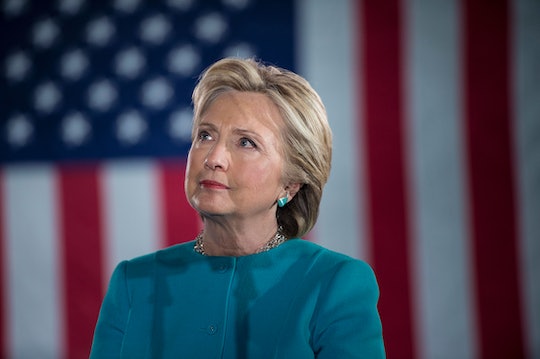 Why Did Hillary Clinton Cancel Her Election Night Fireworks? It's A Close Race Now

In late October, Hillary Clinton's campaign announced that she would spend election night under a literal glass ceiling that mirrors the figurative one she has often said has blocked women from the Oval Office. And soon after naming the Jacob K. Javits Convention Center in New York City as the site she planned to break through and claim the presidency, her team also got the official go-ahead to host an explosive victory celebration on the evening of Nov. 8. Clinton seemed supremely confident that she'd prevail in her quest for the White House, but on the eve of the election, Hillary Clinton ultimately canceled her planned election night fireworks, raising questions about her faith in her ability to clinch the highest office in the land as last-minute polls show a narrower race between her and opponent Donald Trump than expected.

The Clinton machine planned its two-minute fireworks display to broadcast her likely coronation as the first woman president of the United States at the end of October, just before the FBI revealed that it had discovered a new cache of emails related to her controversial use of a private email server as Secretary of State. This precipitated waning enthusiasm for Clinton among her supporters is part of a pattern that may well have held even after the FBI announced that it would uphold its recommendation of no charges for Clinton Sunday after actually reviewing the correspondences in question.

Now, even as Clinton maintains a lead over her Republican challenger in most national polls, some Democrats fear that the fact that Trump has crept back into the margin of error means that he might defy expectations and garner enough votes to win the Electoral College after all, The Hill reported.

As in, for Clinton to plan a fireworks extravaganza cleared to begin just hours after the polls close on the East Coast could come across as presumptuous rather than confident.

In fact, rumblings to that effect emerged among New York City officials charged with keeping order and spearheading security efforts in the city that night (Trump will be stationed there for the vote count as well) — at least according to the New York Post. The tabloid anonymously quoted local police and fire personnel making critical comments like "If she loses, will she take it over to the East Side and sell it to Trump for half-price?" in response to the news that Clinton had ordered the display.

There are, of course, other reasons why the Clinton campaign may have opted to nix the fireworks. (Romper reached out to the campaign, the New York Police Department, and the United States Coast Guard Sector New York, but none of these entities responded to a request for comment.) The NYPD and Secret Service are preparing for a huge security operation Tuesday, local ABC affiliate WABC-TV reported, complete with special counter-terrorism forces and officers with heavy weapons, but it's unclear whether the attention to national security influenced the decision.

Perhaps Clinton has a less conventional celebration than fireworks in store. After all, fireworks are quite traditional — just like electing a white man to the presidency is traditional. For the first Madame President, well, maybe that requires something fittingly fresh.