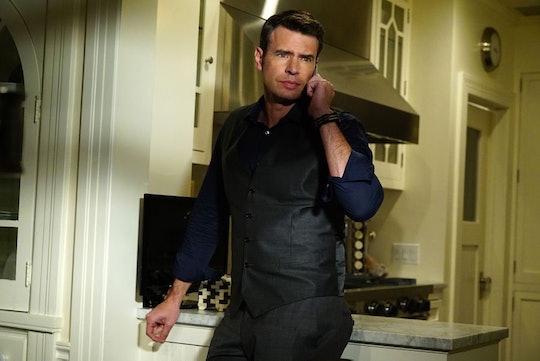 Why Did Jake & Vanessa Get Married On 'Scandal'? Olivia Didn't Stop Them

One of the most on again/off again couples on television has to be Olivia and Jake on Scandal. When the season picked up again earlier this year, they were on; as per usual, that did not last too long. Not only did Olivia and Jake end their relationship, Jake quickly became engaged to another woman, Vanessa Moss. Olivia's father, Rowan, schemed to have them get married quickly. While Olivia tried to stop it, she was unsuccessful. Then, Olivia and Jake plotted for him to dump Vanessa at the altar... but that didn't happen, either. So, why did Jake and Vanessa get married on Scandal?

It's clear that Jake did not hurry to marry Vanessa because he loved her. He is very much still interested in Olivia — even moments up to saying his wedding vows. Jake still pursued Olivia despite his engagement, and vise versa. It was also not exactly "love at first sight," as Jake met Vanessa in a suspiciously similar way he met Olivia: bumping into each other in a public place then disappearing and reappearing days later. Partway through the episode, he revealed he does not really love her. Big surprise.

He also was not doing this to spite Olivia. As seen on Thursday's episode, he cares deeply about her (well, as deeply as someone like Jake can care for someone). Olivia showed up at Rowan and Jake's door after she murdered Andrew, still reeling from the event. They welcomed her back, and for a brief time, Olivia and Jake were on (yet) again. Just a day before his wedding, he revealed he did not want Vanessa — he wanted Olivia.

Despite this, Jake married Vanessa at the end of the episode. If Olivia Pope couldn't stop the wedding, what was causing it? Only Papa Pope. Rowan was hellbent on making sure Jake married Vanessa. The episode also revealed much of Jake's backstory, which includes his relationship to Rowan. While Rowan was abusive, Jake accepted his role as "son." Even more so, Rowan accepted the role as Jake's father.

Olivia showed up to the wedding prepared to stop it. Rowan revealed that if Jake did not marry Vanessa, he would slit Jake's throat. At that point, Olivia bought the wedding back together by telling Jake she did not want to be with him. Her father's threat got to her — which Jake suspected, but she did not say so.

Rowan orchestrated the entire wedding — maybe even Jake and Vanessa's entire relationship. Whatever the case, he got his wish. Knowing Olivia, this will not stop her if she wants to be with Jake. But will Rowan want that? And will Vanessa find out? Scandal has proven dozens of times that anything can happen.